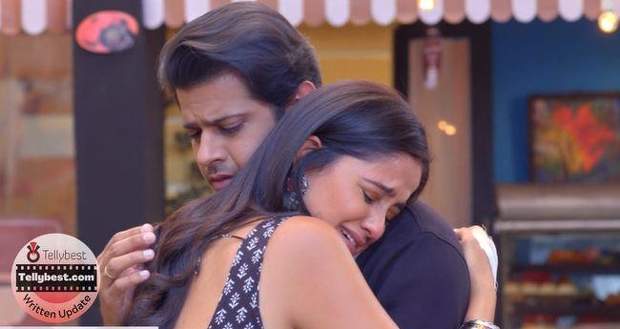 Meanwhile, Virat admits to being wrong and tells Sai that he is responsible for all the problems in life and that it is because of him that their son is not with them anywhere.

Sai also apologises to Virat for involving her in her quest when he was happy in his life with his son and wife.

Realising that Virat is married to Patralekha, Sai gets away from him quickly as if waking from a dream and tells Virat that they should forget about all this and move on in their life.

Virat looks at Sai walking away from him and tells her that he cannot explain in words how much he regrets not telling her the truth.

At home, Virat is thinking about Sai and her complaint at the cafe and the hug they shared after a long time.

Virat tells himself that hugging Sai and crying in her embrace has covered all the distance of the past and all the pain, complaints, and heartaches have melted with tears.

He admits that he wants to hear her voice again and see her face.

Later he comes to the room where Patralekha watches him like a hawk reading his every movement and recalling seeing him hugging Sai.

Virat is unaware of Patralekha’s scrutiny and promises to make Vinayak part of Sai's life to such an extent that she will not feel the emptiness of losing Vinayak.

The next morning, Virat asks Vinayak if he would like to go to Sai’s place to do the project as Patralekha is unwell.

In the meantime, Patralekha comes to the table and shocks everyone by exposing Virat hugging Sai at the cafe and accuses him of turning to Sai as she is of no use to him because of her infertility.

Bhavani fumes in anger questioning Virat why everyone in the house is after her political career by showing this shameless behaviour.

However, Virat tells Patralekha that she is putting allegations against him without knowing the complete truth.

He also tells her that his heart is free of malice and he will not explain his actions to anyone.

After Virat’s departure, Patralekha burst into anger saying she should have been dead by now instead of living this miserable life.

Later Bhavani pays a visit to Sai and accuses her of instigating Karishma into leaving the house and having an affair with a married man and trying to destroy another woman's house.

Sai gets angry and tells her that she has no right to insult her outside her house and make a spectacle.

She also tells her that her inability to manage her home is not her problem and she is reaping what she has sown.

Bhavani angrily threatens Sai of using her power to throw her out of this city but cannot intimidate Sai who challenges her to do her best.

Sai is agitated at the hospital and is about to call the Virat when Jagthap calls her to tell about Karishma’s boyfriend who is nothing but a parasite.

He also sends Karishma’s address to Sai who is having an affair with him.

Later, Virat becomes happy seeing Sai’s call while Sai on the other hand angrily tells him about the information she has on Karishma and he can do whatever he deems fit.