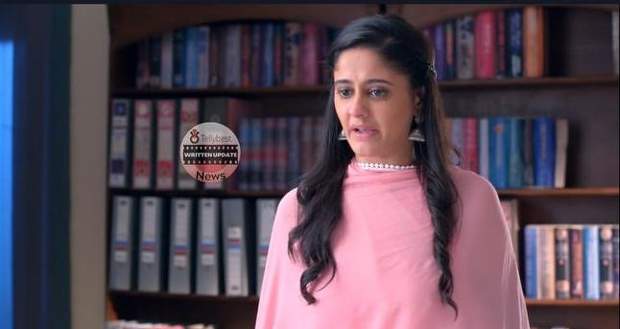 Virat looks at Patralekha in astonishment and tells her that Vinayak has her room while this place is for Savi.

Patralekha looks disappointed and tells Virat that she has come to make room for herself in the tent because he has forgotten her.

Virat looks ashamed and tells Patralekha that it is not true but he is only excited to have Savi.

Patralekha tells him she understands and that she is happy that he has met his daughter.

Meanwhile, Savi wakes up to see Ashwini sitting on the bed and calls her Maam.

Ashwini feels disappointed to hear her call her Maam.

Just then Vinayak also comes to Savi and tells her that doctor aunty has not arrived yet.

Later, Virat hears Savi’s voice and rushes to her room without assisting Patralekha in increasing the tent size.

Meanwhile, Sai imagines Savi in the interrogation room who is complaining to her for keeping her away from her father.

She also calls Sai selfish and that she does not want to return to her because she is bad.

Sai cries thinking about Savi while Jagthap comes to the police station and calls her.

Meanwhile, Savi is telling Vinayak to make a call.

Just then, Virat comes to Savi and Vinayak and tells Savi that Sai is out of Network now.

However, Savi is not convinced and tells Vinayak to check as Bhavani must have blocked her number like before.

Meanwhile, Sai becomes angry to see Jagthap and scolds him for telling Virat the truth.

Jagthap is ashamed and tells Sai that he only wants to make everything right as he cannot see Savi crying for her father.

Sai shouts at him telling him that his attempt to help has put her in jail and away from Savi.

She also tells him that Virat is angry because he found out the truth from him who he hates the most in the world.

She tells him that Virat was right to tell her to keep him out of his life and threatens him of killing him if anything happens to Savi then she will destroy his life.

Just then Sai feels dizzy and she falls down on the floor.

Meanwhile, Savi is disappointed to see the phone not picked up.

On the other hand, Jagthap comes running out asking for help for Sai.

The constable sees Sai and takes her out in the fresh air.

Meanwhile, Savi wants her mother and tells Virat to cancel all his plans and give her Sai’s address so that she can go to Sai.

Seeing Savi cry so much, Virat wonders if he is doing the right thing by keeping Savi away from her mother.

Meanwhile, Jagthap is fanning Sai and sprinkling water on her.

Just then a constable calls Sai’s faintness nothing but drama.

Jagthap gets angry with the constable and goes to talk to him.

He calls the constable heartless for keeping Sai away from her daughter.

In the meantime, Savi continuously cries for her mother when Ashwini comes to her and tries to cajole her into eating some breakfast.

On the other hand, the officer goes to check on Sai and is shocked to see her AWOL.

Meanwhile, Sai tells Virat to use all the power in the world but he cannot keep Sai and Savi apart.

© Copyright tellybest.com, 2022, 2023. All Rights Reserved. Unauthorized use and/or duplication of any material from tellybest.com without written permission is strictly prohibited.
Cached Saved on: Monday 21st of November 2022 12:43:08 AMCached Disp on: Thursday 1st of December 2022 01:30:02 AM