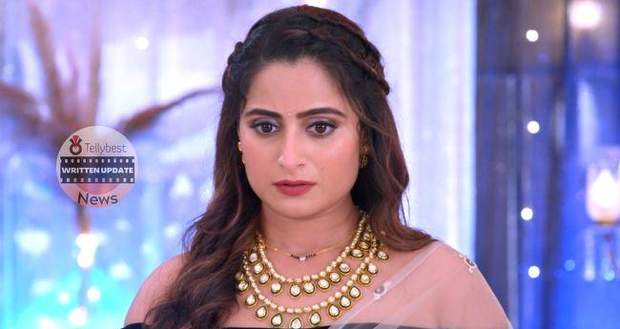 Today's Ghum Hai Kisi Ke Pyar Mein 13th October 2022 episode starts with Bhavani talking about showing Sai her true place and making fun of her to an extent that Sai and her daughter will never think of coming back to the Chavan house.

Meanwhile, Sai watches Patralekha and Virat’s picture in Virat’s room and sarcastically thinks that Patralekha got what she wanted.

Just then Ashwini closes the door to Virat’s room and tells Sai to behave like a guest and not cast an evil eye on the happiness of their family.

Sai feels hurt at Ashwini's cold behaviour and assures her that she does not long to be back here.

She tells her that she remembers very well her reason for leaving this house and losing something very precious.

Therefore, there is no chance of her casting an evil eye on their family's happiness.

After a while, Vinayak offers Sai an anniversary cake while Bhavani and Sonali enjoy the spectacle of Sai eating the cake.

In the meantime, Pulkit affectionately talks to Harinee about her meeting with Sai and tells her that he hopes that one-day Harinee will grow up enough to listen to her dad.

Afterwards, Shivani announces the dance performance of Patralekha and Virat.

Sai watches Virat and Patralekha dance closely with each other and feels hurt at their closeness while Virat looks at Sai with cold eyes and dances invigoratingly with Patralekha.

Meanwhile, Bhavani asks Omi to mix alcohol in Sai’s drink so that she could make a spectacle of herself among the guest.

However, Patralekha instead of Sai drinks the doctored drink and feels liberated.

Just then Virat calls Patralekha to introduce her to his guests.

In the meantime, Savi asks Vinayak about his baby pictures while Vinayak tells him that he does not have any.

However, he agrees to ask Virat about them at Savi’s insistence.

Later, Virat introduces Patralekha to his seniors without being aware of her intoxicated state.

Omi and Bhavani watch Patralekha like a hawk hoping she does not make a spectacle of herself.

Meanwhile, Patralekha complains to Virat’s boss about Virat being so busy that he even forgot to wish her an anniversary.

Virat looks at Patralekha’s strange behaviour and balances her on his arm as she clings to him like a vine.

Sai is also listening to Patralekha and Virat’s exchange and getting to know them better.

Meanwhile, Patralekha tells Virat that she wants him to play the instrument for her just like he played at the Yoga retreat and she wants to dance to his beats.

Virat looks astonishingly at Patralekha’s demand while Sai looks at them with jealousy.

© Copyright tellybest.com, 2022, 2023. All Rights Reserved. Unauthorized use and/or duplication of any material from tellybest.com without written permission is strictly prohibited.
Cached Saved on: Monday 21st of November 2022 07:02:53 AMCached Disp on: Sunday 4th of December 2022 11:53:14 PM