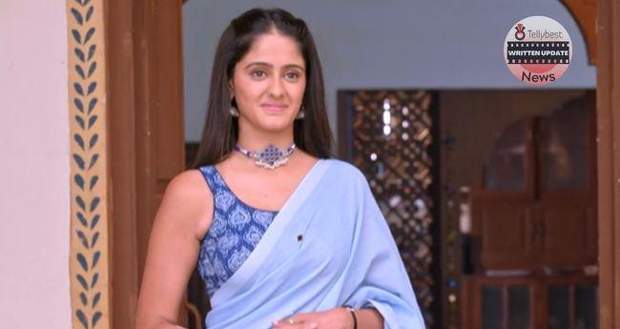 He would have killed Gulab Rao if Sai hadn’t intervened.

Gulab Rao runs for his life after threatening Virat with consequences.

At the Chavan’s house, the most awaited granddaughter Harini, Devi's daughter is a spoilt teenager who misbehaves with Bhavani on her arrival.

Patralekha rebukes Harinee for misbehaving but Harini does not take heed and tells them that she is a college-going girl now and can take care of herself.

Bhavani is not impressed with Harini’s answers and tells her that she needs to teach Harini manners so that she can learn to live with a family.

Harinee does not take kindly to being treated like a child and tells everyone to not be sweet on her.

Later, a lighter drop from Harini’s pocket shocking everyone.

Meanwhile, Vinayak worries over Virat’s wound while Savi tells him that Virat is strong and will get better once her mother applies medicine to him.

Sai tells Virat that he should not have interfered with Gulab Rao as she knows how to handle men like him.

Later, Sai offers to treat his wound but Virat refuses her help.

However, Savi insisted and offers to treat him instead.

However, Harinee is least bothered and tells them that smoking is no big deal in today’s culture and stops Karishma from throwing away her cigarette packet.

Seeing Harini’s spoilt behaviour angers Bhavani and she tells her that she cannot let her get out of hand.

Just then, Patralekha calls Virat and Vinayak picks up his phone to update Patralekha about his treatment as well as Virat being hurt after fighting some goon.

Patralekha gets worried and asks Vinayak to hand over the phone to Virat.

Sai looks complainingly at Virat and is about to leave the room when she collides with a table.

Seeing the concern in Savi’s eyes, Sai assures her that she is fine and goes to the Kitchen.

Meanwhile, Patralekha hears Sai’s voice and a wave of fear passes through her spine.

When asked, Virat ignores the questions and talks about Vinayak’s treatment.

In the kitchen, Usha questions Sai’s feelings for Virat and divulges that Virat still cares for her.

However, Sai tells her that she has no interest in Virat’s life and he should not have interfered as she knows how to handle men like Gulab Rao.

© Copyright tellybest.com, 2020, 2021. All Rights Reserved. Unauthorized use and/or duplication of any material from tellybest.com without written permission is strictly prohibited.
Cached Saved on: Friday 30th of September 2022 09:49:52 PMCached Disp on: Saturday 1st of October 2022 12:22:12 AM