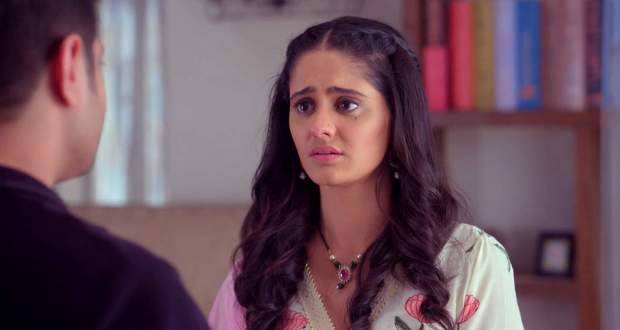 Bhavani tells her that Rajeev is s mistake of the past that she does not want to discuss and if Sai tries to bring that mistake to the front then she will have to bear the consequences.

Sai is waiting outside the police station for Shivani.

Later, Shivani tells her that she does not want to tell anyone about it.

Shivani is anxious about meeting Rajeev and asks Sai for reassurance.

Sai comforts her saying that she should not worry and that everything will be alright.

At the police station, Virat is surprised to see Shivani, while Shivani tells him that she is here to meet Rajeev.

Virat tries to stop Shivani from speaking to Rajeev and tells her to give a statement against Rajeev and trust him.

At the same time, Shivani tells Virat that she is here to clear things out.

Virat accuses Sai of brainwashing Shivani while Shivani scolds Virat for treating her like a child.

Later, Shivani spots Rajeev drawing on the wall and whispers his name.

Rajeev turns around to find Shivani crying while looking at him.

Seeing Shivani, Rajeev expresses his excitement and tells his cellmate that his prayers have been answered.

However, Shivani looks at him angrily and shouts at him while telling him that she hates her.

Smiling like a fool, Rajeev thanks Shivani for hating him which gives him hope.

Shivani accuses him of finding happiness in her tears whereas Rajeev refutes her saying his happiness lies in her smiles and laughter but he understands her anger and she has a right to it too.

Rajeev also tells her that he still loves her and admits his sin for leaving her alone at the altar.

Shivani slaps him while Rajeev remains smiling and tells her to hit him more to which she complies and cries afterwards.

Shivani questions Rajeev for leaving her so long ago and tells him that she cannot forgive him.

Rajeev begs Shivani for a second chance and tells her that she will not regret her decision.