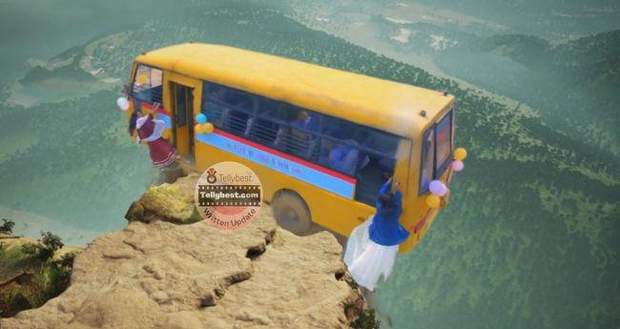 Today's Ghum Hai Kisi Ke Pyar Mein 14th December 2022 episode starts with the principal asking the final question and praises Virat for giving the right answer and announcing Virat and Sai as the King father and the Queen mother.

Patralekha feels that she has lost the battle of life.

After a while, Savi and Vinayak request Sai and Virat to sing this song which is Sai’s favourite.

On being given a mike, Sai and Virat sings the song while tear stream down from their eyes.

After a while, Sai offers to click Patralekha's picture with Virat and Vinayak.

Later, Savi and Vinayak express their astonishment at Virat knowing so much about Sai when he knows nothing about Patralekha.

Vinayak's words felt like nails being pierced in Patralekha's heart and she closes her eyes in agony.

After some time, Sai tells Virat that he has trapped himself in a place where his every action will either hurt Patralekha or her.

She also tells him that for now Patralekha is hurting and he should go and talk to her.

Afterwards, all the people once again board the bus to travel further ahead.

Seeing Patralekha’s mood Virat asks Vinayak to go and sit with Savi as he wants to sit with Patralekha.

However, Patralekha tells her to go and sit with Sai.

On their way to a picnic, Ashwini asks Ninad if Virat is again falling in love with Sai as they are meeting regularly for one thing or another.

However, Ninad tells Ashwini that Virat has an obligation towards Patralekha and will never do anything like that.

Ashwini taunts Ninad for being basic and tells the family that there is something more than duty and obligation and that is love which is a duty in itself but he as a man will not understand this.

Meanwhile, Virat tries to show Patralekha that he remembers his first meeting in detail which agonises Patralekha even more.

She tells him that there is no point in reminding her of something so far back in the past when he cannot be bothered to remember anything about the woman who has been living with him for years.

She tells him that those were the basic questions that her salesman at the shop or a waiter at the cafeteria also knows because they were paying attention.

Virat feels ashamed and hands over his hanky to Patralekha whose tears have finally broken the barriers and streaming down her eyes.

However, Patralekha tells him to never offer his hanky to just anybody.

Just then, the bus tyre gets punctured and the bus begins to twist and turn uncontrollably making passengers go topsy-turvy.

© Copyright tellybest.com, 2022, 2023. All Rights Reserved. Unauthorized use and/or duplication of any material from tellybest.com without written permission is strictly prohibited.
Cached Saved on: Wednesday 25th of January 2023 05:22:01 PMCached Disp on: Thursday 9th of February 2023 05:09:52 AM