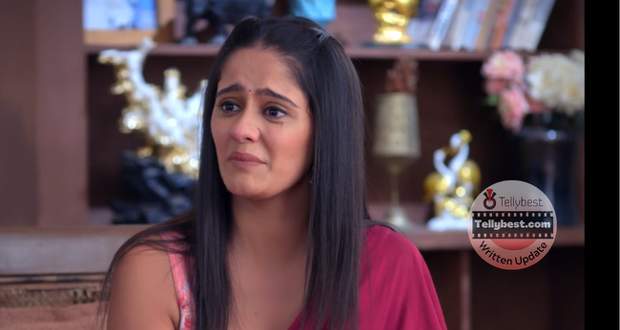 Today's Ghum Hai Kisi Ke Pyar Mein 14th January 2023 episode starts with Sai telling Virat that she is not interested in creating any problem in his family but has come across some information about Karishma who is having an affair with the wrong sort of man.

Hearing anger in Sai’s voice Virat asks her what has happened.

Virat feels frustrated at Bhavani’s interference and causing unnecessary trouble between them.

In the meantime, Mohit is drinking while thinking of Karishma and throws his phone in anger.

Just then Virat comes to him and tells him to not indulge in drinking and focus on bringing Karishma back.

However, Mohit refuses to go despite Virat’s assurance that Karishma was only trying to get her attention.

Virat shares his own experience and tells him to not repeat the same mistake and bring Karishma back.

However, Mohit walks away from Virat telling him Karishma is dead for him and those people never come back.

Meanwhile, Sai apologises to Anandi for breaking and entering her office and thanks her for giving information to Virat.

However, Anandi misunderstands and let slip that Virat has told them to not tell anything to her.

Hearing that, Sai become suspicious and tries to interrogate her which puzzles Anandi and she sternly tells her to not repeat her mistake again in future or else she will have to call the police.

Elsewhere, Virat reaches Karishma’s place and finds her doubling in pain on the floor.

Meanwhile, Bhavani is watching the news on television where she is being trolled because of Karishma and gets angry at Sonali for not keeping her daughter-in-law in check.

Omi feels offended on Sonali’s behalf and blames Sai for all this matter.

Ashwini tries to defend Sai but Bhavani also agrees with Omi and reminds Ashwini how Sai has made a spectacle of the family in front of the whole colony.

She also tells them that she has returned the favour and made a spectacle of Sai in her locality.

Meanwhile, Sai comes to Karishma’s place and is worried to see Karishma’s condition.

In the meantime, Patralekha comes to Ashwini to return the yarn that she has given to knit for her baby.

Seeing Patralekha’s depressed mood, Ashwini tells her to not give up on life if dreams shatter.

She tells her that she needs to recover her health and care for herself.

However, Patralekha tells Ashwini that there is no point in her recovery when her husband is still fixated on his ex-wife and keeps her as a priority instead of her.

She gave Virat second chance after the bus accident because she can see remorse in Virat’s eyes at that time.

However, Virat has no shame in hugging Sai publicly and also dares to lie to her face.

Feeling helpless and lonely, she asks Ashwini what she should do in these circumstances.

Ashwini shares her experience when she was in a similar patch of life and tells her she was only able to come out with Virat’s help.

She reminds Patralekha that she also has Vinayak and she should focus her energy on him.

However, Patralekha is not able to let go of her dream of having her own baby and completing her family with Virat.