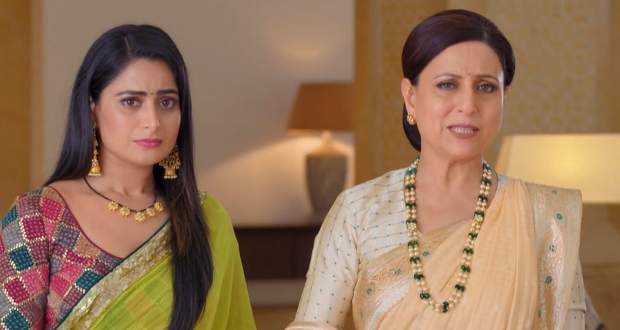 Sai says that her and Mohit's relationship is different from Virat and Patralekha's relation.

Further, Sai taunts Bhavani by saying that maybe she too has become selfish staying with her which makes Bhavani burst out with anger.

After some time, Bhavani taunts Ashwini with a grimace on her face that they shall celebrate Sai's come back by ordering sweets.

Ashwini takes Bhavani's words seriously and tells her if she is saying that then they shall definitely do it.

On the other hand, Sai gets emotional coming back to her room and seeing her father's photograph.

Meanwhile, Ashwini comes and Sai hugs her telling her that she missed her a lot.

After a while, Virat tries to tell Sai that he is incomplete without her but Sai ignores and starts talking about Devyani.

Upcoming Ghum Hai KisiKe Pyaar Mein (GHKPM) episode update: Sai plans a carry out a ritual by making all the arrangements by herself.

© Copyright tellybest.com, 2020, 2021. All Rights Reserved. Unauthorized use and/or duplication of any material from tellybest.com without written permission is strictly prohibited.
Cached Saved on: Thursday 27th of January 2022 01:03:37 PM