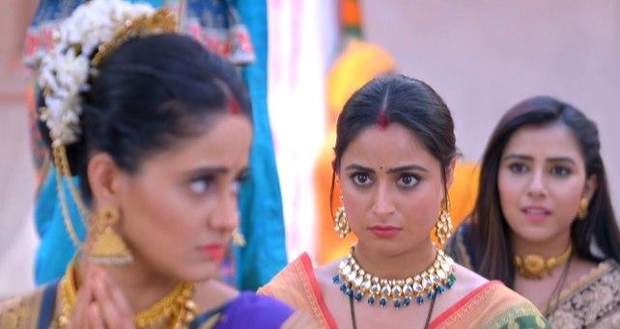 Afterwards, Bhavani enquires about Patralekha’s worry and tries to comfort her.

Coming out of the bathroom, Virat embraces Sai and tries to cheer her up by getting romantic with her.

However, Sai’s mood remains sour as Virat lies nag at the back of her mind.

Virat tries to convince her to let him tell the truth his way and in his own time.

Virat explains to her that just like Sai will prepare her patient mentally before giving him shocking news similarly he is preparing Bhavani to hear the truth.

Virat and Sai’s talks turn into an argument and then bantering and then romance.

Later, Sai stops Virat from being romantic and reminds him of her condition but Virat continues in his romantic mood until Sai runs off.

On the other hand, Bhavani wants to know why is Patralekha worried about Sai.

To comfort Patralekha, Bhavani tells her that she is playing with Sai’s emotions by giving attention that would keep Sai within her limits.

Patralekha cautions Bhavani to be careful as Sai is not worth trusting.

However, Bhavani is assured that Sai has changed because of Virat’s love.

Patralekha warns Bhavani that Sai is only pretending to be good but in reality, she is nothing but selfish and soon she will find out too.

After a few days, Bhavani informs Sai to prepare for a ‘Haldi Kumkum’ event and make ‘Pana and Ambachidaar’ for the event.

Sai tries to broach the subject of her internship but Bhavani rebukes her.

Just then Virat and Pulkit come in with congratulatory notes and balloons.

Virat announces to everyone, with great admiration that Sai has once again topped the University.

Ashwini hugs Sai with love while Mohit and Samrat pick her up in celebration.

Sonali instigates Bhavani against Sai while Sai feels delirious with happiness at her outstanding result.

Bhavani stops the celebration with an angry voice and Sai looks at her with dread.