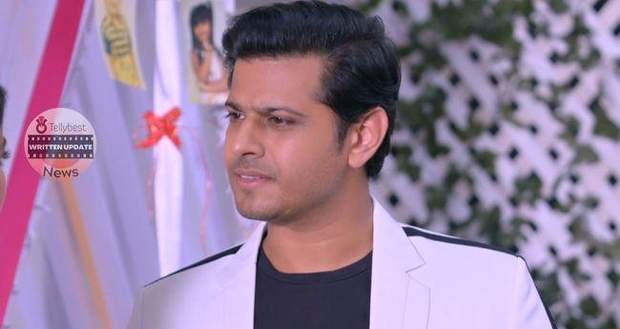 Ashwini tells her that it is why she is telling her to eat so that Sai can eat as well.

Savi is surprised to hear that mothers have superpowers that tell them about their children's activities and agree to have breakfast.

Meanwhile, Jagthap is astonished to see Sai escape and wonders if a mother can do anything for a child.

In the meantime, Ashwini uses small talk to distract Savi from remembering Sai and makes her eat something.

Seeing Ashwini playfully feeding Savi makes Virat happy and he thanks her for helping him take care of Savi.

Nevertheless, Ashwini tells him that they cannot keep Savi distracted for a long time from thinking about Sai but Virat stubbornly tells her that he will make Savi forget Sai.

After a while, the police capture Jagthap for helping Sai escape.

However, Jagthap tells them to arrest him illegally just as they arrested Sai.

A constable tells the police officer that Sai must have gone to Virat’s house.

In the meantime, Bhavani comes to Patralekha and berates her for bringing Sai back into their life and jeopardising her marital life despite being aware of Virat and Sai's history.

Seeing Ashwini helping Virat to eat, Bhavani gets angry at Ashwini for showering love on Sai’s daughter and accepts her as their grandchild on her say so.

After a while, Ashwini comes out telling Bhavani that breakfast is ready and she will lay the table right away.

However, Bhavani scolds her for changing sides but Ashwini tells her that it's in a woman’s nature to love just like she loves Harini and tries to compensate for all the time when she could not love and support Devi.

Ashwini also tells Bhavani that she does not want to harbour regret later in life for not using the opportunity when it was there.

Bhavani tells Ashwini that if it is proven that Savi is the Chavan’s blood then she will accept her and showers love upon her as well but not before that.

Ashwini tells Bhavani to not be so cynic and believe Sai if she has said Savi is Virat’s daughter then she is.

On the other hand, Sonali is angry at Mohit and Karishma for not providing her with a grandchild while Virat has two children now.

Sonali tells Mohit and Karishma to go on a Honeymoon and work on making a grandchild but Karishma tells her that she and Mohit do not live as husband and wife and therefore there will be no child no matter where they go.

Leaving Sonali and Omkar shocked, Karishma walks out of their room in anger and embarrassment.

After breakfast, Savi, Virat and Vinayak are playing hide and seek when Savi spots Sai and runs to her.

Both Virat and Vinayak are shocked to see Sai at home.

Sai hugs Savi tightly while tears rain down her eyes.

© Copyright tellybest.com, 2022, 2023. All Rights Reserved. Unauthorized use and/or duplication of any material from tellybest.com without written permission is strictly prohibited.
Cached Saved on: Monday 21st of November 2022 06:26:02 AMCached Disp on: Saturday 10th of December 2022 02:07:36 PM