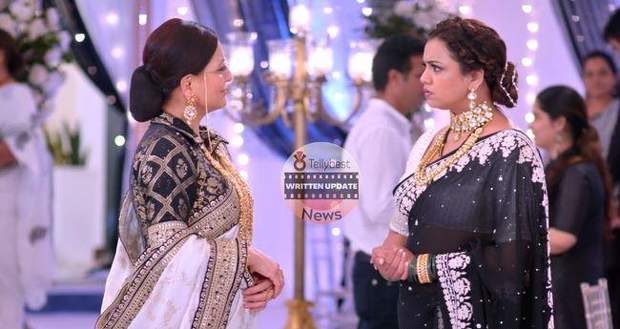 Virat is hesitant but Patralekha tells him that she wants to lose herself in his musical beats.

Virat’s boss also insists saying the golden rule of life is to never say no to his boss and wife.

After a while, Virat begins to play and Patralekha begins to dance to the beats of “Ghum Hai Kisi Ke Pyaar Mein”.

Sai also recalls several moments in the past when Virat played for her and feels overwhelmed by the bombardment of memories.

Unable to take anymore, Sai begins to leave with Savi when Patralekha’s confession to Virat stops her.

Virat is equally shocked to hear Patralekha’s confession while Patralekha expresses her happiness at being his wife.

Seeing Sai leave, Patralekha drags Sai inside and introduces her to the guest as Vinayak’s doctor.

Patralekha expresses her gratitude that it is because of her that Vinayak is happy and hopeful of being healthy.

Patralekha invites Sai to say a few words and stands beside Virat almost falling into his arms.

Sai looks at Virat and with pain pouring out in her voice, and wishes Virat and Patralekha a happy wedding anniversary.

Praising Virat’s skill on Jambe, she also appreciates the love clearly visible among them and prays for it to continue till eternity.

Afterwards, Sai comes to Bhavani and shames her for her cheap trick while pitying her for still being the same.

Just then Patralekha falls unconscious and Virat carries her to her room.

Meanwhile, Bhavani apologises to her guest for Patralekha and asks them to enjoy the party.

In the meantime, Virat settles Patralekha on the bed.

However, Patralekha stops him from leaving and tells him that she knows very well that he has danced today with her only to show Sai how happy he is with her.

She says that she knows he must be resenting Sai’s speech where she congratulates them on being together.

Virat tells Patralekha that she is too intoxicated and it is better to talk tomorrow but Patralekha stubbornly tells him that she wants to talk now.

Patralekha questions Virat for not letting Sai go from between them and asks him if he still loves Sai.

Virat feels torn by Patralekha’s questions and tells her to sleep.

However, Patralekha hugs him confessing her love and asks him who would he choose between Sai and her if it ever comes to that.

Virat vehemently denies any such possibility and tells Patralekha to lie down.

Patralekha is also exhausted and falls asleep on Virat’s arm repeating her question about choosing Sai or her.

© Copyright tellybest.com, 2022, 2023. All Rights Reserved. Unauthorized use and/or duplication of any material from tellybest.com without written permission is strictly prohibited.
Cached Saved on: Monday 21st of November 2022 07:13:02 AMCached Disp on: Wednesday 7th of December 2022 03:42:35 PM