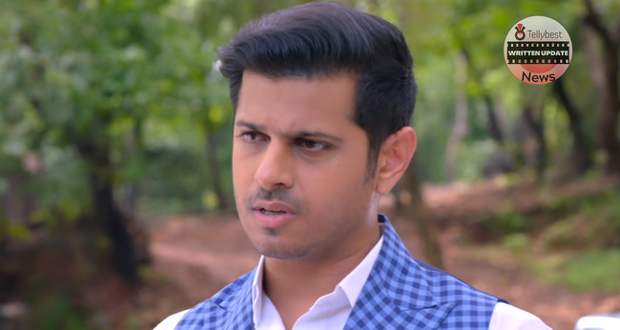 Today's Ghum Hai Kisi Ke Pyar Mein 14th September 2022 episode starts with Usha telling Sai that she does not like Virat talking to his wife and that is why she is hiding in the kitchen while Sai tells her that she is not interested in his personal life.

Meanwhile, Patralekha is concerned about Virat and offers to come to them as soon as possible.

However, Virat refuses the offer and tells her that he will call her later.

In the kitchen, Usha questions Sai why Virat had beaten Gulab Rao for humiliating Sai when he never tried to find her.

Sai tells her that it is Virat's habit of causing problems in her life and then becoming God to solve them but she will not fall for this trap. Besides, he is only here for Vinayak and she is his doctor.

After a while, Sai offers water to Virat but he refuses which Sai takes as his anger.

However, Virat accuses her of being angry for not contacting them despite being alive.

Sai asks him to not talk about the past as they have decided.

However, Virat wants to know why has she never contacted him and to whom Savi belong.

Sai tells him that Savi is her daughter and she bore her despite the doctor’s opinion.

Virat is shocked to hear it and asks Sai who is Savi’s father.

Being offended, Sai refuses to tell him and accuses him of moving on.

Meanwhile, Virat tells her that he has been considering her dead after seeing her name on the list of deceased.

Virat and Sai continue to argue circling around the topic and blaming each other for moving on in their life.

Meanwhile, Ashwini suggests to Patralekha to go to Katkavli now that the crisis is over.

In the meantime, Vinayak asks them what are they talking about while Savi asks him about his yesterday’s behaviour.

On the other hand, Gulab Rao is angry at being beaten and tells his goons to go and teach Sai a lesson.

Later, Virat and Vinayak are ready to go while Gulab Rao’s men wait for him to leave.

Meanwhile, Mohit comes to Patralekha to get her signatures and expresses his gratitude for believing in him and making him a confident person.

He also apologises to her for his past behaviour while Patralekha tells him that she has always considered him his younger brother.

Elsewhere, Virat is about to leave Sai's house when he realises that his car tyres are punctured.

Before he could understand anything, Gulab Rao’s goons attack him.

During their struggle to keep themselves safe, Savi gets kidnapped by the goon.

© Copyright tellybest.com, 2020, 2021. All Rights Reserved. Unauthorized use and/or duplication of any material from tellybest.com without written permission is strictly prohibited.
Cached Saved on: Friday 30th of September 2022 06:00:39 PMCached Disp on: Saturday 1st of October 2022 04:35:40 PM