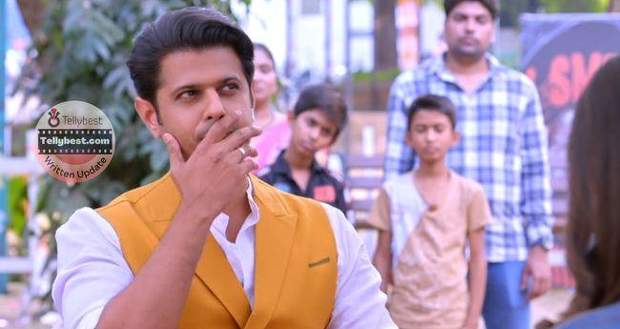 Virat tells her that he has to use his right hand for writing a lot and that is why he don't wear it.

Afterwards, Virat tries to cajole Patralekha into smiling and tries to take photograph with her camera.

Seeing Patralekha smile at his antics, Virat tells her to always keep her smile intact and that she is very important to him as she was there when no one was.

He also tells her that let the time come and then he will show her how important she is to him.

However, Patralekha is not convinced and tells him that his eyes do not speak the same language as his words.

Patralekha tells him that he needs to put more effort into their relationship and when the day will come when he will know her the way she knows him then and only then will she believe him.

After a while, school teachers comment on Virat trying to appease Patralekha and make fun of him for having to deal with his ex and current wife.

Just then Vinayak asks Virat to click his photo and Virat obliges.

At the same time, the bus tyre gets punctured and it starts to swerve, and its break stops working.

The bus is out of control and starts jerking everyone to and fro, injuring them in the process.

At last, the bus stops but gets stuck on the cliff.

Everyone begins to scream at the top of their voice seeing the drop while Virat asks them to be quiet.

Later, Virat goes to the bus top to get the rope and ties the bus to the tree to get some time.

Afterwards, Virat asks everyone to get down one by one.

Meanwhile, Sai is having a flashback of the accident many years back and is frozen in time.

At the same time, Patralekha feels dizzy and silently falls onto the back seat without anyone’s knowledge.

After everyone gets down, Virat sees Sai still on the bus and asks her to go down but Sai is in trans and begins to shout telling Virat to save their Vinu.

Virat realises Sai’s condition and picks her up to get her down but she continues to scream for Vinayak.

In trying to get her down, Sai’s head hits the bus door hard and she feels dizzy as Virat puts her down and helps her get off the bus.

Meanwhile, Patralekha is still on the bus lying unconscious.

Later, Virat takes Sai away from the bus and tries to get her to consciousness.

© Copyright tellybest.com, 2022, 2023. All Rights Reserved. Unauthorized use and/or duplication of any material from tellybest.com without written permission is strictly prohibited.
Cached Saved on: Wednesday 25th of January 2023 09:42:24 AMCached Disp on: Tuesday 31st of January 2023 07:30:30 PM