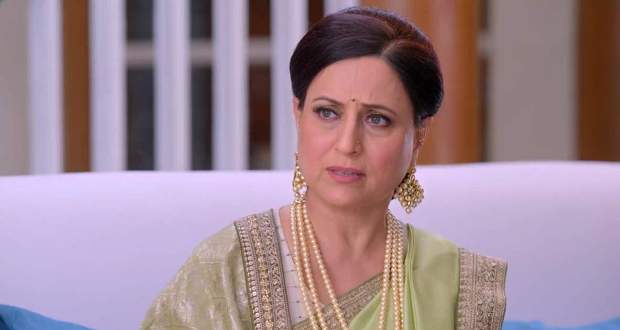 Today's Ghum Hai Kisi Ke Pyar Mein 15th July 2022 episode starts with the doctor hiding Patralekha behind the curtain when a phone bell is heard and a robber goes to get the phone and kills the doctor who was asking for help.

Robber tells the hostages that if they dare to speak then tony will kill her.

Patralekha messages Virat telling him about she and Bhavani are trapped in a hospital.

Meanwhile, the robber contacts Virat and tells him his demands saying that he needs a helicopter in 3 hours or else he will start killing people one by one every 15 minutes.

The hostage requests them to let him go but the robbers hit him hard.

Sai tells him that as a doctor she needs to look after her patient.

Virat tries to avoid giving the link but hearing Sai’s voice Virat agrees to give the link and asks the robber to tell him where to send the link.

The robber asks Sai to give her email id to Virat which she tells very quietly.

Meanwhile, Patralekha texts Virat to find out about the situation and tells him that Bhavani and she are inside and scared.

Just then equipment falls on the floor with Partalekha’s hand and they are also caught by the robbers.

The robbers take away their phones while Jagthap recognises Bhavani and Patralekha and wonders why all the Chavan family is here.

Virat asks DCP to do something fast before the robbers figure out that Sai is his wife.

The DCP tells the Virat to keep the situation under control while they do everything to get their demands in time.

The DCP also instructs Virat to let no one die on his watch.

Meanwhile, a patient needs to use the restroom and her husband asks the robber to let her go.

The robber threatens to kill the couple while Sai interferes and tells him that these hostages are his lifeline.

The robber finds Sai's talk reasonable and allows them to take Sai and the women to rest room.

After a while, Jagthap tells the robbers that Sai is  Virat's wife and Bhavani and Patralekha Virat are also his family member.

© Copyright tellybest.com, 2022, 2023. All Rights Reserved. Unauthorized use and/or duplication of any material from tellybest.com without written permission is strictly prohibited.
Cached Saved on: Monday 21st of November 2022 06:23:35 PMCached Disp on: Monday 5th of December 2022 02:35:37 PM