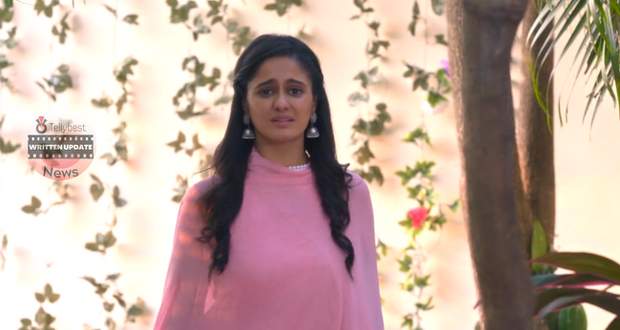 Today's Ghum Hai Kisi Ke Pyar Mein 15th November 2022 episode starts with Sai hugging Savi and asking her how has she been.

Virat is shocked to see Savi in tears and tries to talk to her.

However, Sai tell Virat not to interfere while she is talking to her daughter.

Ashwini feels scared that Sai might tell her the truth.

Later, Sai apologises to Savi for leaving her and tells her that she was stuck in between very bad people and couldn’t even receive her call.

Meanwhile, everyone comes out of the house after hearing the noise.

Sonali happily tells Bhavani that Sai will take Savi with her while Bhavani tells her that Virat will not let her leave easily.

In the meantime, Patralekha points out to Virat how precious a mother’s love is for children and nothing in the world can replace it.

Patralekha also tells him that he will have to sacrifice his anger and stubbornness for Savi’s sake because Savi cannot live without Sai and if he takes away Sai from her then he will snatch her childhood from her.

Just then Police also arrive at the scene and offer an excuse but Virat stops them.

Afterwards, Virat miss Savi and looks at the various preparation that he has done for her.

Thinking about Savi leaving, Virat feels sad that Savi did not turn back even once to see him.

Just then Ninad comes to comfort Virat and tells him that he did right for letting Savi go with Sai.

Virat blames Sai for having no place for him in Savi’s life but he cannot be like her and take Savi away from her.

Meanwhile, Usha brings food for Sai and Savi while Savi tells Sai all the wonderful things Virat has done for her.

In the meantime, Virat is not ready to believe that Savi will behave the same way after knowing Virat is her father.

However, Ninad tells him that it will not make any difference to Savi because nothing can compensate for her mother’s love.

He tells Virat that even the law is on Sai’s side and will not take Savi from Sai.

However, Virat does not accept this and leaves in hurry saying he will not let Savi get away from him.

Meanwhile, Savi ties herself with Sai so she cannot leave her again while she sleeps.

Later, Savi asks Sai to sing her a lullaby-like Virat.

Sai looks jealous and tells Savi that she only knows stories.

Savi suggestion to call Virat to sing a lullaby scares Sai and she refuses to call anyone and asks Savi if she is not enough for her.

Savi hugs her affectionately and tells her that she is her life and she cannot live without her and also will make do with her stories.

Sonali also tells Bhavani that Virat and Sai will start seeing each other again on the pretext of meeting Savi.

© Copyright tellybest.com, 2022, 2023. All Rights Reserved. Unauthorized use and/or duplication of any material from tellybest.com without written permission is strictly prohibited.
Cached Saved on: Monday 21st of November 2022 01:29:07 AMCached Disp on: Thursday 1st of December 2022 01:53:04 AM