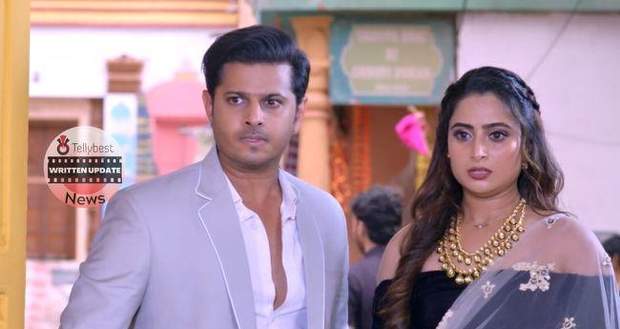 Omi also feels offended and tells Bhavani that it was not his fault that Patralekha drank the drink meant for Sai.

Virat overhears Bhavani and questions her for doing such a despicable act.

Bhavani proudly tells him that she would have felt proud knowing she did something to keep Sai away from their life.

Virat is disappointed to hear Bhavani’s plan and tells her that her unnecessary plotting only hurt them.

Meanwhile, Savi is talking non-stop to Usha about the party when Sai asks her to go and change.

Usha enquires Sai for looking upset and Sai tells her that there is nothing to tell.

In the meantime, Virat tells Bhavani that she should have remembered the illustrious guest present at the party.

Bhavani is offended at Virat’s accusation and asks Virat why he kept meeting with Sai a secret and why did he bring Sai back into their life.

Bhavani proudly admits to planning Sai’s downfall and accuses Virat of arguing with her as soon as Sai is back in his life.

Later, Sai and Virat are lost in their thoughts thinking about the party and Patralekha’s love confession while Virat wonders if Sai is happy to see him and Patralekha together.

The next morning, Patralekha is shocked to see the videos and feels embarrassed.

Patralekha apologises to Virat but he tells her that it wasn’t her fault as she was under the influence of alcohol and he does not blame her.

Patralekha is sad to hear Virat dismissing her love confession as unimportant.

Later, Vinayak is practising in his school when his classmates come to make fun of him.

However, Vinayak remains calm and tells them that his win will shut their mouth because his mother and his doctor aunty has faith in him.

Meanwhile, Savi tells Sai that Vinayak does not have any baby pictures in his album and asks her why does her photo album not have any pictures of her father.

On the other hand, the bully boys run away after seeing Virat's car approach.

On being asked, Vinayak tells Virat that he handled the boys well and said to them that his win will be their answer.

Virat smiles and asks Vinayak if he is ready to meet Savi.

After a while, Sai tells Usha that the time has come for Savi to know about her father and soon she will tell her about him.

Just then, Virat and Vinayak come to Sai’s house.

Virat apologises to Sai for Patralekha’s misbehaviour the previous night.

Meanwhile, Sai tells him that she will remember their hospitality and will bring them a gift very soon.

© Copyright tellybest.com, 2022, 2023. All Rights Reserved. Unauthorized use and/or duplication of any material from tellybest.com without written permission is strictly prohibited.
Cached Saved on: Monday 21st of November 2022 06:09:15 AMCached Disp on: Monday 5th of December 2022 12:23:53 AM