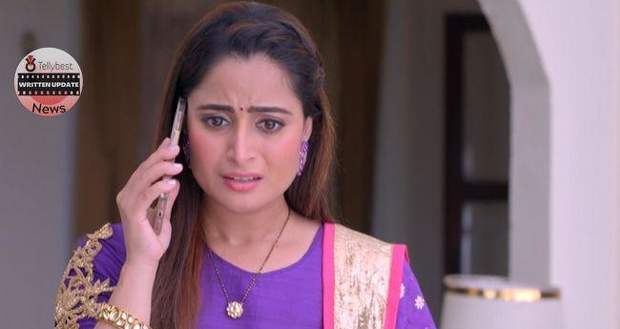 Virat tells Sai that he will get Savi back and they follow the goons in Virat’s car but the bike gets lost in the traffic.

Meanwhile, Patralekha sees the adoption paper and remembers the time when she went with Virat to adopt Vinayak.

Virat's hope was shattered when he was told that he needs to be married to adopt a child as per the rules of the orphanage.

After a while, Patralekha remembers how Virat was disheartened to hear that marriage clause for the adoption and Ninad suggested that she marry Virat so they both can complete each other and adopt Vinayak in the process.

After reminiscing about the past Patralekha was applying sindoor when it falls on the ground.

Patralekha gets worried and comes down asking Ashwini to give her Sindoor (vermillion).

Harinee mocks their old traditional values and tells them that it was just a part of makeup items.

Shivani tries to make her understand that Sindoor (Vermillion) is not just any makeup item but a part of the tradition.

In the meantime, the goons transferred Savi in a car and leave.

Ashwini tells Harinee that it is this Sindoor that has brought Patralekha and Virat together.

Patralekha remembers the time when Virat told her that he would only be able to be her friend after marriage and that they cannot live like proper husbands and wives.

Later they got married in the registrar's office for the sake of Vinayak.

After a while, Patralekha gets worried when Virat does not pick up his phone while Ashwini tells her that he must be busy with Vinayak’s treatment.

Meanwhile, Sai calls Gulab Rao to ask him about Savi but he denies having any information about Savi and tells her that she should take better care of her daughter or else someone might harm her someday.

Sai shouts at him but Gulab Rao is not intimidated and disconnects the phone.

Sai gets worried that Gulab Rao is powerful and can do anything to Savi.

In the meantime, Savi uses Gulab Rao’s phone to send her live location to Sai.

Sai is happy to get the location and they follow the map to reach the place. Meanwhile, Gulab Rao brings Savi to a construction site and hangs her on the tallest pulley.

Sai and Virat who are following the directions are horrified to see Savi hanging on the pulley.