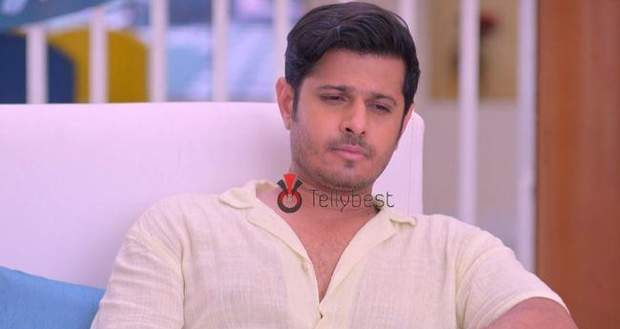 Today's Ghum Hai Kisi Ke Pyar Mein 16th August 2022 episode starts with Virat telling Sai that she is an orphan and that is why leaving them behind will not be a problem for her.

Sai is shocked to hear Virat’s accusation and tells him despite having no family she was taught to always stand by the truth which he has forgotten and is standing with lies.

Virat tells her that he stands with his family but she will not understand his feelings because she is an orphan.

Ashwini tells Virat to not say things in anger that he will regret later.

Sai tells them in tears that being an orphan she knows the value of family more than anyone but she will not stay in this house if Patralekha is brought back to the house.

Meanwhile, Sonali suggests to Virat to take Sai and settle somewhere else.

Sai adamantly tells everyone that she will only stay if Patralekha stays in jail or away from this house.

Meanwhile, Bhavani tells her that she cannot forget Patralekha’s debt as she has given birth to the family’s heir and she will bring Patralekha to this house only.

Just then Omi gets the call from the lawyer and asks Virat to assist him.

After a while, Patraleha is released on bail and she asks Virat to forgive her but Virat remains detached and tells her to go home.

After a while, Patralekha asks for Sai and Karishma goes to call her.

However, Sai comes down with a bag and tells everyone that she is leaving the house with Vinayak.

Patralekha apologises to Sai and tells him platitudes to forgive her but Sai is in no mood to listen to her and tells everyone that she is leaving.

Virat looks at Sai in anger while Shivani and Devi also try to convince Sai to not go and telling her that a child needs a family.

However, Sai tells them that she can look after Vinayak and his need alone just like her father.

© Copyright tellybest.com, 2020, 2021. All Rights Reserved. Unauthorized use and/or duplication of any material from tellybest.com without written permission is strictly prohibited.
Cached Saved on: Friday 30th of September 2022 07:52:48 PMCached Disp on: Saturday 1st of October 2022 12:38:57 AM