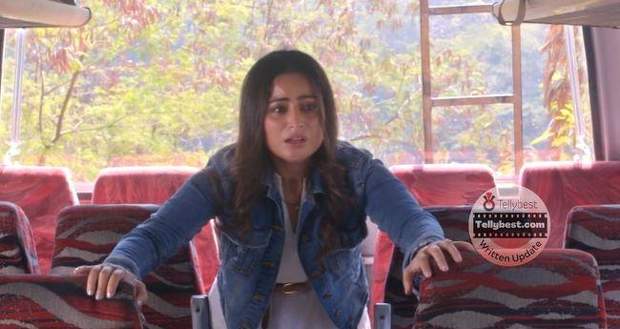 Today's Ghum Hai Kisi Ke Pyar Mein 16th December 2022 episode starts with Virat getting shocked to see blood on Sai’s head and panicking at the thought of losing her.

Just then Ninad finds some accident victims on the road asking for help and is shocked to hear Vinayak and Savi’s school names.

Meanwhile, Vinayak and Savi also come running there and tries to wake Sai.

Virat is having a flashback of Sai’s accident and tells Sai that he will not let anything happen to her.

Sonali accuses Sai of being inauspicious and prays only for Virat, Patralekha and Vinayak but Bhavani scolds her saying that she should pray for everyone on the bus as every life is important even Sai and Savi too.

Later, Patralekha wakes up to find herself alone on the bus and calls for Virat.

Meanwhile, Virat is bent on Sai giving her CPR.

Just then Patralekha watches Virat bend over Sai and her hopes shatter in front of her.

She recalls Virat’s words about Sai and that she is only important as Savi’s mother and that Patralekha is more important to him.

Patralekha sits back in shock and recalls the moments of her youth when she first met Virat while Virat is ensconced in Sai, Savi and Vinayak.

Later, Vinayak misses Patralekha and asks for her and then Virat realises that Patralekha is still on the bus.

He goes to call her and asks her to get down.

However, Patralekha remains motionless while tears stream down her eyes.

Virat runs towards the bus and pulls the rope which is about to break.

Just then Ninad and Ashwini arrive there as well and are shocked to see Patralekha still inside the bus while Virat struggles to pull the bus and asks Patralekha to get down.

Virat is too late and his struggles go in vain as the rope breaks with the wait and the bus rolls down the hill.

Later, Virat goes down the hill looking for Patralekha, not ready to give up hope on Patralekha.

Soon the night falls and there is no news of Virat or Patralekha.

Vinayak seeks assurance from Sai about Patralekha and refuses to drink water until she comes back.

Just then Virat returns looking sad and forlorn at not being able to find Patralekha.

Later, Bhavani, Sonali, Omi and Mohit arrive at the accident site and are shocked to hear about Patralekha.

Ninad realises that Virat has come defeated and tells him that he understands that the pain of losing someone takes away the life from the inside but the truth has to be accepted.

© Copyright tellybest.com, 2022, 2023. All Rights Reserved. Unauthorized use and/or duplication of any material from tellybest.com without written permission is strictly prohibited.
Cached Saved on: Wednesday 25th of January 2023 09:38:48 AMCached Disp on: Sunday 5th of February 2023 04:04:17 AM