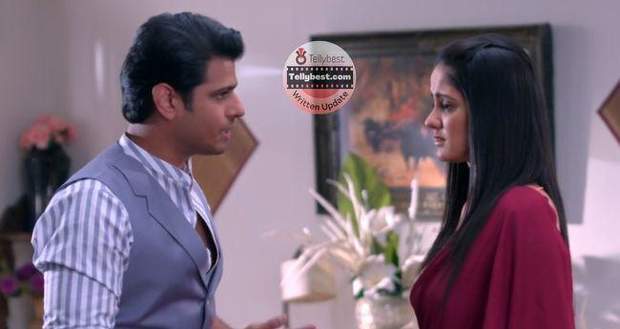 Today's Ghum Hai Kisi Ke Pyar Mein 16th January 2023 episode starts with Patralekha hugging Vinayak and thinking that he is the only one who cares for her otherwise no one really cares for her.

Ashwini watches Patralekha with Vinayak and prays to fill her life with happiness.

In the meantime, Karishma thanks Sai for helping her and she knows she did it because she still considers her family.

However, Sai tells her that she has helped her because of humanity and because she has gone through the same experience and understands the pain of losing a child.

Recalling Veenu Sai tells her Karishma has gone through this pain twice once through miscarriage and once through a bus accident.

Virat who is listening to Sai while driving thinks that their son is alive.

Just then Virat takes a steep turn and a flower falls touching Virat’s mobile screen and revealing Anandi’s message that reads that Sai is suspicious of him but she has not told her anything.

Sai looks curious to read the message and wonders what is Virat and Anandi hiding from her.

Virat thanks Sai for helping him and Karishma despite his family’s insulting behaviour.

On offering to compensate, Sai asks him to sit with him in Vinayak’s Punnye Tithi Pooja.

Virat once again refuses Sai saying that he does not want to remember those bitter and painful moments.

Sai’s suspicion grows strong and she calls Jagthap, asking him to meet her.

Meanwhile, Virat sees Anandi’s message and calls her but has to cut the call short seeing Patralekha in the room.

As Patralekha is about to leave, Virat stops her and apologises to her for witnessing him with Sai and asks her to not misunderstand him.

However, Patralekha tells him that she cannot ignore what she has seen with her own eyes.

She reminds him that he has prioritised Sai when she was about to die on the bus and now also he is hugging Sai when she is suffering through the pain of losing her womb.

As tears seep from her eyes, she tells Virat that she used to be his best friend with whom he shared all his problems but he has taken that privilege from her as well.

Virat denies Patralekha’s claim but she tells him to prove it by telling her the reason for hugging Sai.

Meanwhile, Sai tells Jagthap to retrieve this information from Orphanage’s computer without letting Virat know about it.

Jagthap recalls that one of his friends/men works as a peon in Bal Orphanage who can get the information for them.

Meanwhile, on Virat’s refusal, Patralekha gets furious and tells him that he is breaking the last thread of information from her and now he does not have to pretend to care for her.

Virat thinks that he cannot tell her that what he is doing is to keep Vinayak with her.

On confirming the sweaters to be baby Vinayak’s, Sai cries with happiness knowing Vinayak is alive and then turns angry at Virat for knowing and keeping it from her.

At home, Sai tries to comfort Karishma by sharing her pain and telling her what she went through when she lost Vinayak in a bus accident.

She tells her to resolve her misunderstanding with Mohit and then they can together deal with the pain of losing their child.

Karishma is sceptical about Mohit’s forgiveness while Sai tells her that Mohit will definitely support her as he loves her a lot.