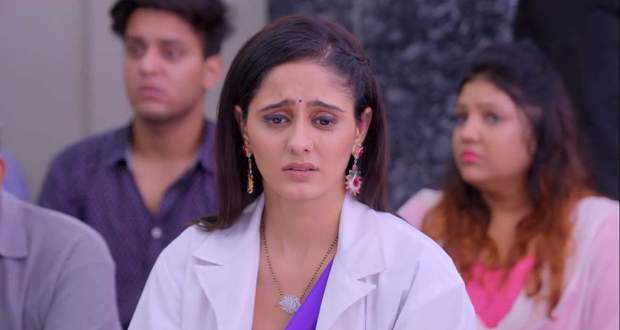 Today's Ghum Hai Kisi Ke Pyar Mein 16th July 2022 episode starts with Jagthap telling Tony that Sai, Bhavani and Patralekha are Virat's family members and asks him to let him go because he has given such wonderful information to him.

Tony tells Jagthap that he will let him go so he goes out and tells the police about them.

Tony throws Jagthap with the hostages when Patralekha recognises Jagthap.

Sai also sees Jagthap and attacks him in anger for killing Samrat.

Afterwards, Tony talks to Virat and tells them that his family members are his hostages.

Virat tells Tony to leave his family alone and tell him what he wants.

Tony gives five minutes to Virat to give him the link else he will face consequences.

Virat tells the technician to hurry as lives are at risk.

Sai thinks of something and asks Tony to give her phone to her to check the link.

Meanwhile, Jagthap uses the opportunity to message his father about the situation and asks him to save him.

As soon as Vitthal Maane receives the message he comes into action to save him.

After four minutes, Tony questions Jagthap about his advice on putting Virat’s family at gunpoint to get things done.

Sai shames Jagthap for telling Tony about them and tells him that because of him she has lost so much and now Bhavani’s life is at risk.

As the time is getting over Tony gets ready to shoot Bhavani while Virat hurries the technician.

With a few seconds to spare Virat sends the link to Sai’s mail.

Virat tells Tony that they are bringing the helicopter from Pune and it will work once the Helicopter leaves the airbase.

Tony once again warns him to not play any tricks on him else he will regret his smartness.

Meanwhile, Commissioner asks Virat what if Tony realises the link is fake and kills someone.

Virat tells them that this link is very much real looking and will show them moving helicopters.

Afterwards, Virat arranges food for the hostages for which Tony sends Jagthap and one another hostage.

Virat recognises Jagthap as he comes to take lunch packets and points his gun at him to kill him when DCP tells him to not act in personal vengeance and thinks of hostages.

Vitthal Maane also arrives at the scene and asks Virat to put down his gun.

Just then Jagthap tries to escape via scooty and gets shot by the robber.