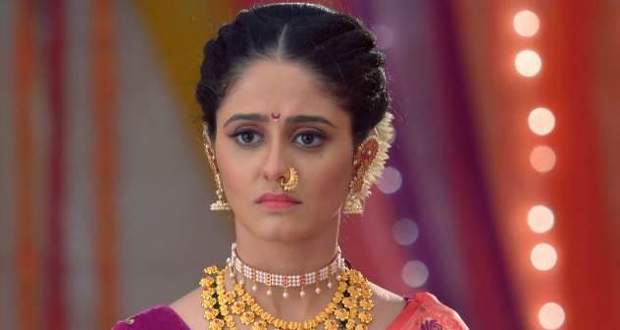 Today's Ghum Hai Kisi Ke Pyar Mein 16th March 2022 episode starts with Sai telling Bhavani to let go of her hand as she is Virat’s wife and asks everyone to focus on “Holika Dahan."

During ‘Parikrama’ Sai teases Virat and prays for strength and support to win Virat back.

While following everyone as they go inside and admires house decoration.

Bhavani drags Sai back, stopping her entry to the house while threatening to call the police to throw her out of the colony.

Sai tells Bhavani that she is not afraid of the police for she is not in the wrong.

Pulkit also favors Sai and gets rebuke in return.

Before Omi could call the police Sai herself make the call and asks them to come to the Chavan house.

After a while, Police arrive at the Chavan house while Sonali questions their authenticity.

The police recognize Sai and again offer to help her in any way.

Sai asks the Police to tell the Chavan family about punishment for abusing a daughter-in-law.

Suspecting ill-treatment, the police officer asks Sai whether she is being abused.

Feeling annoyed, Bhavani asks the Police to not worry and asks them to go.

Before entering the house, Sai asks everyone to make all the objections now or forever hold their peace.

Angrily, Bhavani warns Sai that she can only enter the house with force but not the heart.

While entering the house Sai puts her feet on the plate filled with Vermillion water and makes her footprint in a customary way making Bhavani lose her temper.

Bhavani scolds Karishma for her irresponsibility but Sai tells them that it is all God’s doing and continues inside.