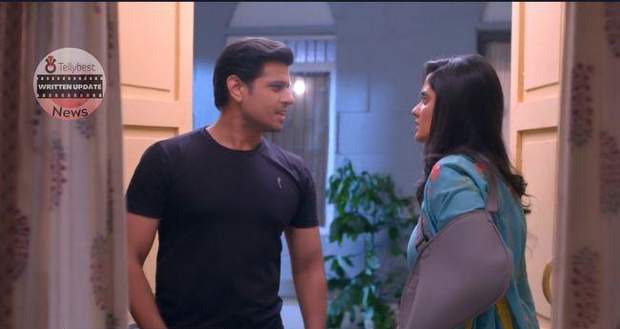 Bhavani gets angry and tells her that she will never let this happen.

Meanwhile, Usha asks Sai what should be their next step.

Just then, Virat comes to Sai's house and she asks her to go but he tells her that he is there to apologise to her.

Sai taunts Virat, saying she thought he has come to take her daughter and pass it to Patralekha like before, who is now his wife.

Becoming sarcastic she tells him that his pattern of apologising after making mistakes is still the same.

Virat is not fazed a bit and tells her that unlike her, he has the guts to apologise after making mistakes.

Later, Virat tells her that he is here to meet Savi whereas Sai tells him that Savi is her daughter and only she will decide who she will meet and will not.

Virat gets angry and tells her that no force in the world can now keep her away from his daughter.

He also tells her that once he will tell Savi that he is her father and then he will see who Savi wants to live with.

Sai becomes scared and begs Virat to not tell Savi anything.

She tells him that will he be able to make her understand the complication of their relationship and how he is married to Patralekha.

She requests him not to burden Savi at such a young age.

Just then Savi calls Sai and Virat rushes to her and shuts the door.

Sai anxiously knocks on the door telling Virat to open the door and not tell Savi anything.

Meanwhile, Savi asks Virat why he has locked the door and why is Sai beating the door from outside.

However, Virat distracts Savi telling her that he has good news to share with her but he will tell her that they will listen to her favourite song.

While Savi dreads Virat telling Savi his truth and cries for her.

Later, Savi comes out and tells Sai that Virat has agreed to be her father.

Meanwhile, Patralekha is seen standing at the door and Savi invites her in.

After a while, Virat tells her that he has not told Savi the truth and asks Sai to promise him that she will not take Savi away from Nagpur so that he can also be a part of her life.

Sai tells her that it will only complicate matters for everyone and he should have discussed this with his wife first.

As Sai asks Patralekha her opinion, Virat interrupts her and tells her that Savi is his daughter and only he will decide in this matter.

Hearing Virat, Patralekha feels sad at not having any value in Virat’s eyes for her opinion.

In the meantime, Savi calls Vinayak and happily tells him that Virat has signed the adoption papers and now he is her father too.

Vinayak also gets excited and goes to share the news with the family.

© Copyright tellybest.com, 2022, 2023. All Rights Reserved. Unauthorized use and/or duplication of any material from tellybest.com without written permission is strictly prohibited.
Cached Saved on: Monday 21st of November 2022 01:10:28 AMCached Disp on: Saturday 10th of December 2022 02:31:00 PM