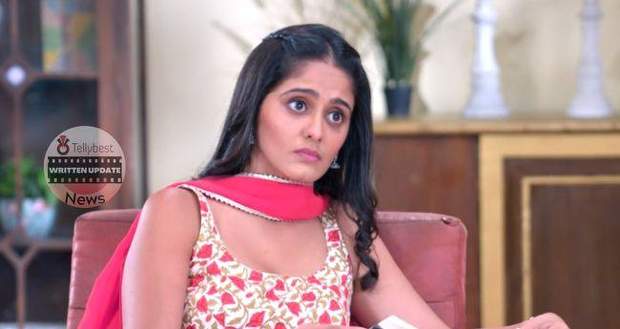 Today's Ghum Hai Kisi Ke Pyar Mein 16th October 2022 episode starts with Vinayak who has come to Sai for his session, asking Sai about the party when Sai tells him to focus on his exercise.

After a while, Vinayak asks Sai how everyone knows her at his home.

Sai admits to Vinayak about knowing his family before.

Meanwhile, Savi becomes excited and tells Sai that now they can go to the Chavan house whenever they want.

However, Sai gets irritated and tells Savi that she cannot go to Chavan's house again and tells her to concentrate on her studies now.

After a while, Sai is writing her resignation when Usha reminds her that she is getting late for her work.

Meanwhile, Savi is telling Virat that something has happened to her mother for her to behave stubbornly.

Vinayak assures Savi that he will talk to Sai and ask permission to let Savi go.

On the other hand, Usha looks puzzled at Sai while Sai feels agitated and hurt.

Sai unconsciously tells Usha that Vinayak is adopted and if he had received treatment at the earliest then he wouldn’t have been suffering.

Vinayak who has come to talk to Sai is shocked to hear about his adoption.

With shaking legs, he returns to the room and relives Sai’s comments.

After a while, Patralekha comes to pick up Vinayak and apologises to Sai for her previous night’s behaviour.

However, Sai ignores her apology and tells her to not get personal with each other.

Patralekha also notices Vinayak’s unusual quietness and asks him in the car if someone has said something to her but Vinayak cries in silence and says nothing.

At the orphanage, the manager asks Sai her reason for leaving the job without joining.

Meanwhile, Vinayak and Patralekha return home and Vinayak goes to his room without answering anyone.

Elsewhere, Sai tells the manager that she has regrets about leaving the job but her reasons are personal and have nothing to do with the job.

Later, Virat goes to talk to Vinayak about gearing that he is behaving oddly and gets shocked to hear Vinayak talk about his adoption.

Virat tries to tell Vinayak that it's not true but Vinayak does not believe him and calls them liars.

Afterwards, Patralekha decides to tell Vinayak the truth and tells him that they love him so much despite his being adopted.

However, Vinayak asks them continuously about his real parents and why did his parents leave him.

Virat and Patralekha console Vinayak and tells him that it changes nothing between them.

Later, Vinayak tells them that he found out about his adoption from Sai.

Virat looks at Patralekha in shock while Patralekha questions him about Sai knowing about Vinayak’s adoption.

© Copyright tellybest.com, 2022, 2023. All Rights Reserved. Unauthorized use and/or duplication of any material from tellybest.com without written permission is strictly prohibited.
Cached Saved on: Monday 21st of November 2022 06:52:11 AMCached Disp on: Tuesday 29th of November 2022 10:30:59 AM