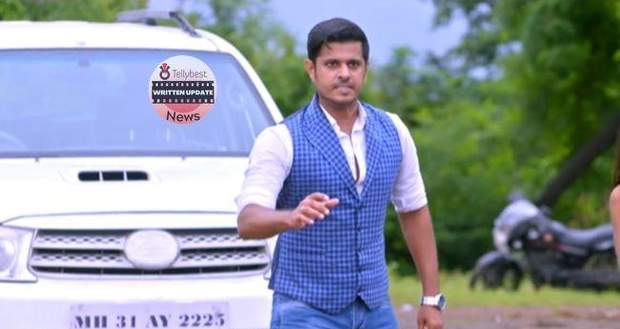 Today's Ghum Hai Kisi Ke Pyar Mein 16th September 2022 episode starts with Gulab Rao recording a video for Sai and telling her to come to the place while Savi hangs with a pulley.

Just then Sai and Virat arrive at the site where Gulab Rao threatens to release Savi from the pulley.

Gulab Rao continues to mock and threaten Sai while Virat also tells him that if anything happens to Savi, he will kill each one of them.

As Sai rushes to save Savi, Gulab Rao asks his goon to drop Savi while Sai tells Virat to save their daughter.

Virat looks at Sai in surprise while Gulab Rao tells Sai to agree to leave his village and go else he will kill Savi.

After a while, Gulab Rao asks his goon to beat Virat while Virat helplessly gets beaten while Savi’s life hangs in the balance.

As Virat is rendered unconscious, Gulab Rao threatens Sai to agree to his terms else she will have to forget Savi.

As Savi asks Virat to save her, Virat wakes up and angrily beats Gulab Rao’s goons while Sai goes to release Savi.

The goon at the pulley pushes Savi down but Virat saves her.

However, the pulley gets stuck and Virat climbs on the Pulley with the help of a rope and releases her.

Meanwhile, Vinayak receives Patralekha’s phone and tells her about Savi being kidnapped and Virat fighting the goons.

Patralekha gets worried to hear the noises and gets frightened for Vinayak.

Afterwards, Virat attacks the last of the goons who try to shoot him but Virat disarms him and goes after Gulab Rao.

Hearing the gunshot, Patralekha panics and decides to leave for KathKauli immediately.

The goon goes to get Vinayak out of the car and put him at a gunpoint asking Virat to leave Gulab Rao.

Just then Sai also puts a gun to Gulab Rao’s head and asks his goon to release Vinayak.

Savi uses the stone to unhand the goon while Gulab Rao pushes Sai away dropping her gun.

Just then Goon picks his gun and shoots at Savi but Virat jumps over her taking the shot on him.

Sai runs to check on Savi and Virat while Gulab Rao runs away with his goon.