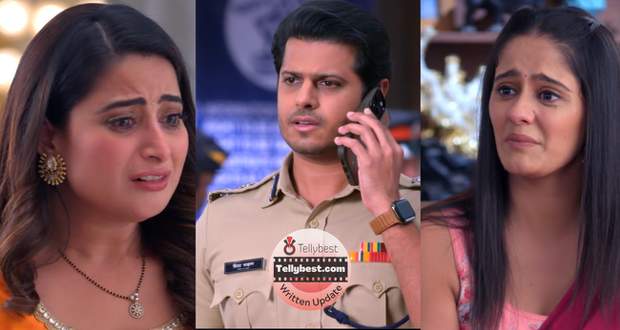 Today's Ghum Hai Kisi Ke Pyar Mein 17th January 2023 episode starts with Jagtap calling Sai to tell her that his man was not able to get more information on the boy because of tight security.

Meanwhile, Savi and Vinayak are talking on video call when Vinayak sees Karishma sitting on the table and asks about  her.

Omi overhears Vinayak and comes to Bhavani to blame Sai for all this matter and that Karishma is living at her house.

Bhavani gets furious to hear Omi and decides to cut off ties with Karishma by making Mohit divorce her.

Sonali is shocked to hear that while Bhavani tells her that she never liked Karishma and after going to Sai’s house she has proved that she does not deserve to be this house’s daughter-in-law.

Meanwhile, Virat brings Mohit to Sai’s house where he is shocked to see Karishma.

In the meantime, Bhavani tells Omi to call Mohit and get rid of this problem as soon as possible.

Bhavani tells her that she does not want Karishma to bring an illegitimate child to this house and call it their heir like Sai.

In the meantime, Mohit is angry to hear Karishma’s tale of misery and also questions the paternity of the child.

Sai shames him for reaching the conclusion without even asking the mother about the child’s father.

Mohit tells her he went against his family to marry her and let go of all his dreams and she repaid him like this.

However, Sai tells Mohit that he is at fault too for stopping giving her time.

She tells him that If Karishma has lost the baby then he has lost it too and their pain is shared.

Sai’s words fall on Virat’s heart as she explains a pain of a mother who lost her child and how she blames herself every second for the loss and wants to turn back time and becomes suicidal.

Sai also tells him that he will always regret not acting at the right time and he will never be able to come out of this loop no matter who else takes her place.

Sai suggests they go inside and talk alone and sort this matter.

Meanwhile, Virat tells Sai that her words made him recall all the past moments when she left the house and met with an accident and how she must have felt at the time.

However, Sai tells him that he can never understand her pain else he would never have stopped her from doing the Punyatithi Pooja.

Virat tells her agitatedly that she once again comes back to the same topic knowing well his feeling about the matter.

Sai also gets angry and asks him if he has really forgotten his son when she could not forget him for a second and is pining for him.

Later, Mohit comes with Karishma and tells Sai that Karishma will stay here for a while but he promises to look after her.

In the meantime, Omi questions Mohit about his whereabouts and tells him that Karishma is living at Sai’s house.

Bhavani and Sonali are shocked to hear Mohit’s declaration about bringing Karishma back to the house.

They tell him that he has gone mad to think that Karishma is welcome here anymore.

However, Mohit sternly tells them that he will decide if he wants to live with Karishma or not and admits his mistake that made Karishma take drastic measures.

The next day, Sai is at the temple for Vinayak’s Punnya Tithi Pooja.

Vinayak sees Sai at the temple and gets off the car to rush to her and is about to get hit by a car when Virat wakes up with a start thinking that Sai’s Punnya Tithi Pooja may affect Vinayak.

© Copyright tellybest.com, 2022, 2023. All Rights Reserved. Unauthorized use and/or duplication of any material from tellybest.com without written permission is strictly prohibited.
Cached Saved on: Wednesday 25th of January 2023 09:00:51 AMCached Disp on: Tuesday 31st of January 2023 06:24:24 PM