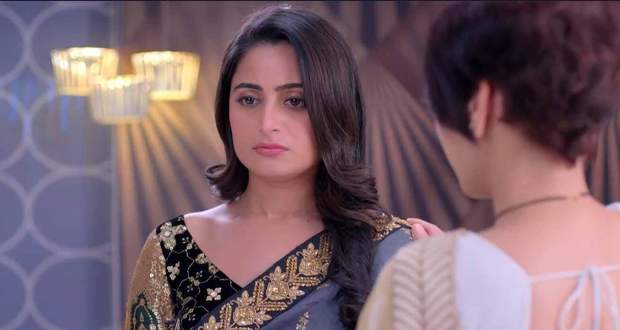 At the cafe, Ninad asks for Virat’s choice.

Just then Patralekha spots Virat and Ninad and worries about them seeing her so decked up.

However Ninad question to Virat stops Patralekha and she sits nearby to overhear their conversation.

On the other hand, Sai is taking rounds in the children’s ward when a nurse brings a newborn whose mother is unconscious.

Sai tells the father to wait for the mother to gain consciousness and only feed him mother's milk and takes the child to make him stop crying.

Soon the nurse comes with news of the child's mother waking up while his grandmother tells Sai that she will be a good mother in future which saddens Sai.

Elsewhere, Ninad urges Virat to share his feelings and asks him whether he feels that Sai is responsible for the miscarriage.

Virat denies blaming Sai but at the same time tells him that Sai reminds him of losing his child.

Patralekha deduces that Sai and Virat are getting distant.

At the hospital, seeing Sai cry, the nurse asks her why is she torturing herself by working in the children's ward.

However, Sai explains to her that she cannot let her personal problems affect her professional life and that it will also help her get over her grief and share her motherly love with these children.

Ninad asks Virat to adopt a child to fulfil his fatherly desires however Virat tells him he only wanted to have a child with Sai and enjoy the journey of becoming a parent.

He appreciates Sai’s effort for showing a strong front in front of him despite her pain and tells him that he understands Sai’s need for comfort through him but finds himself lacking.

Ninad tells him to work on himself and choose a different perception and think about surrogacy or adoption.

Patralekha thinks it to be a signal for herself to win back Virat by using Sai and Virat’s differences.

At home, Patralekha shares her plan of winning Virat back which worries Vaishali.

However, Patralekha is adamant and tells Vaishali that she will back to Chavan's house.

© Copyright tellybest.com, 2020, 2021. All Rights Reserved. Unauthorized use and/or duplication of any material from tellybest.com without written permission is strictly prohibited.
Cached Saved on: Monday 3rd of October 2022 12:07:17 PMCached Disp on: Friday 7th of October 2022 02:30:27 PM