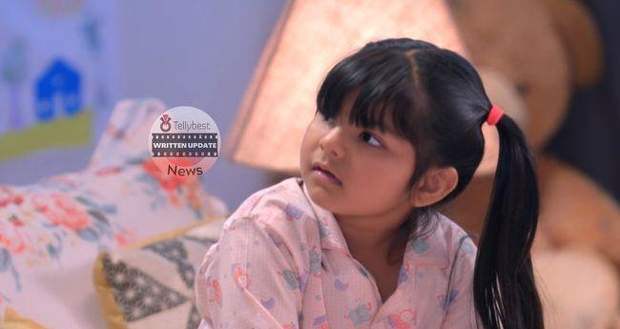 Just then Virat and Patralekha come back and Vinayak asks him to go and bring Savi home.

However, Virat tells him that she is with her mother today and will come tomorrow.

As Vinayak goes to sleep, Bhavani angrily asks Virat about the paternity proof that Savi is his daughter.

Virat tells her that his saying so should be enough.

Meanwhile, Bhavani asks Virat if he has consulted with Patralekha about it and how she feels having Savi and Sai in their life.

Virat tells Bhavani that there is nothing to consult as Savi is his daughter and has right over him and this house.

However, to appease Bhavani, Virat asks Patralekha her thoughts on this matter.

Patralekha remains quite not sure of how to speak her mind.

Bhavani tells Patralekha to speak up and tell Virat that she is not ready to accept his ex-wife and her daughter in the house.

Meanwhile, Patralekha lies to Virat about having any problem with his acceptance of Savi.

Bhavani pities Patralekha for appeasing Virat while Virat asks Bhavani to do the same and accept his happiness about his daughter.

He tells everyone that his daughter Savi will often come here and asks everyone to treat her with love or else stay away from her.

Later, Savi is drawing the tent that Virat has made for her and tells Sai about it.

On the other hand, Ninad is writing down everything he wants to buy for Savi while Ashwini tells him to add Parkar Polka that she wants to give Savi like a traditional mother.

The next morning, Virat asks Patralekha if she is happy with his happiness while Patralekha tells her that Savi coming to the house will complicate matters as Sai will also come home with Savi.

Virat misunderstands Patralekha and becomes angry for not understanding his feelings for his daughter and that she does not want Savi to come here.

Meanwhile, Sai expresses to Usha her concern for Patralekha who is now married to Virat and Savi’s presence will complicate her life.

Sai sympathises with Patralekha telling her that she had been in this situation herself and knows very well how she must be feelings whereas Virat has always been inconsiderate towards the feelings of a woman in his life.

Meanwhile, Ashwini comes to Virat and tells him that she wants to organise a proper veneration and Naamkaran ceremony if that is ok with him.

Virat becomes happy to hear Ashwini’s suggestion and tells her to go ahead and that he will talk to Sai.

Later, Ashwini calls Sai to ask her permission to welcome Savi into their life with all the rituals and ceremonies that they had never had a chance to do before.

© Copyright tellybest.com, 2022, 2023. All Rights Reserved. Unauthorized use and/or duplication of any material from tellybest.com without written permission is strictly prohibited.
Cached Saved on: Monday 21st of November 2022 02:06:07 AMCached Disp on: Friday 9th of December 2022 04:43:35 AM