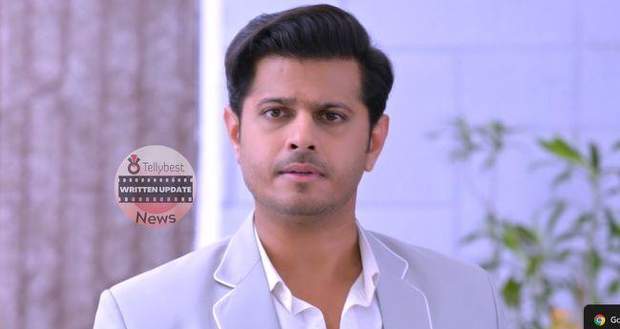 Today's Ghum Hai Kisi Ke Pyar Mein 17th October 2022 episode starts with Virat asking Vinayak how did he find out about this.

Just then Vinayak locks himself in the bathroom.

Patralekha is shocked to hear about Virat’s confession and accuses him of being so careless with such sensitive information and that too without discussing her.

Virat tells her that he unconsciously told Sai while trying to convince her to take the job.

Patralekha feels hurt and blames Sai for hurting Vinayak despite being a mother herself.

Later, Sai gets a call from Virat who accuses her of being heartless and taking away Vinayak from him.

Sai gets puzzled and asks him what is he talking about.

Virat tells her not to act innocent and he cannot believe that she will stoop so low to take revenge on him.

Sai tells Virat that she has not told Vinayak anything and tells him that Vinayak must have heard her when she was telling Usha about it.

Virat shames Sai for being careless about such sensitive information and discussing it with Usha.

Sai also feels hurt thinking about Vinayak who must be feeling lonely and betrayed.

She wonders what she can do to make things right for Vinayak.

Meanwhile, Patralekha tries to convince Vinayak of their love and apologises for not telling the truth themselves.

However, Vinayak feels insecure and unwanted.

On the other hand, Virat calls a psychiatrist to gain insight into Vinayak's condition and how to handle him.

The doctor empathises with Virat and Vinayak and tells him to give Vinayak some space and make him feel loved and also allow him to talk to someone he trusts.

Bhavani and Sonali blame Sai for acting out in jealousy and taking revenge on them.

Sonali tells them that Sai has always kept her pride above all else and has lost everything but hasn't learned her lesson yet.

Just then door bell rings, and Mohit is shocked to see Sai at the door.

As Sai comes to Chavan's house to explain herself, Virat stops her at the door and tells her that she is not welcome in the house.

Ashwini also shames Sai for taking her revenge on the small child.

Sai tries to explain herself and requests them to let her talk to Vinayak.

However, Virat tells Sai to leave or else he will get her arrested.

Later, Patralekha shoves Sai out of the door and shames her for poisoning Vinayak’s mind by telling him such a painful truth.

© Copyright tellybest.com, 2022, 2023. All Rights Reserved. Unauthorized use and/or duplication of any material from tellybest.com without written permission is strictly prohibited.
Cached Saved on: Monday 21st of November 2022 06:37:33 AMCached Disp on: Monday 5th of December 2022 12:51:35 AM