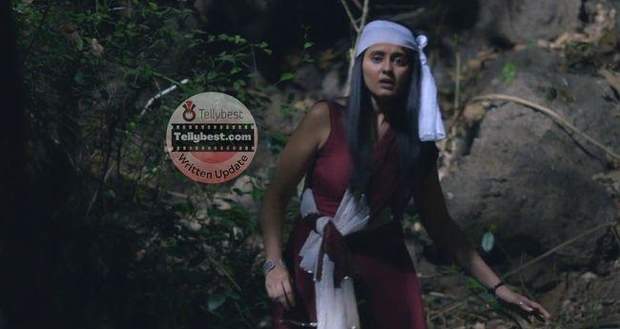 Today's Ghum Hai Kisi Ke Pyar Mein 18th December 2022 episode starts with Virat looking at the broken camera and complaining to Patralekha for not turning to him for a picture and now it seems that she will not turn to him at all.

In the meantime, Sai is preparing for the operation and comes to Virat to comfort him.

She tells Virat that she understands his pain and knows how he is feeling at the moment while promising to return Patralekha to him.

Virat blames himself for Patralekha’s condition and requests him to save her else he will not be able to forgive himself.

After a while Sai is in the Operation theatre, looking after Patralekha, while Virat, Bhavani, Mohit, Ashwini and Omi are waiting outside.

Meanwhile, Ashwini looks for Vinayak and Savi and worries about where they are.

In the meantime, Vinayak and Savi are together and Savi has written on the wall to make Patralekha better and tells Vinayak to do the same as this will make his wish come true.

Savi hugs Vinayak in his embrace while the family look at the innocent faces of the children.

Meanwhile, Sai and other doctors work hard to make Patralekha better but there seems to be no response and the doctor is not hopeful.

However, Sai tells him to not be a pessimist as long as there is breath the person is breathing.

After a while, Patralekha’s heartbeat stops and doctors walk away from the operation theatre to announce Patralekha’s death where as Sai is not ready to give up.

Meanwhile, Virat's hopes shatter after hearing news of Patralekha’s death and Bhavani blames Virat for it.

After a while, Vinayak comes running inside the operation theater telling Paralekha to wake up or else he will not do homework.

Meanwhile, Sai is working on reviving Patralekha and the other doctor tells her to give up and accept Patralekha’s death.

However, Sai does not give up and electrocutes her.

After a while, Sai’s efforts show results and Patralekha breathes.

Later, the doctor tells Virat that they will have to keep Patralekha under observation to see how she turns around and whether she will go into a coma or not.

Afterwards, Virat sits with Patralekha recalling his promise about keeping her safe.

He requests Patralekha to wake up for the sake of Vinayak if not for him.

He tells Patralekha about writing on the wall for her to wake up.

Just then Sai comes there asking Virat to let Patralekha rest and not stress her as it will elongate her time of healing.

Later, Sai is working tirelessly for Patralekha while Virat sleeps beside Patralekha with a bowed head.

In the meantime, Virat wakes up with a start and asks worriedly about Patralekha.

However, Sai assures him that she has been keeping watch on Patralekha and that her vitals are improving.

Virat looks at Sai for the first time and sees her tired eyes.

He asks Sai for being awake the whole night while Sai tells him that she cannot possibly sleep when her patient is in danger.

Above all, she cannot let his wife and Vinayak’s mother alone if her sleeplessness can return their happiness.

Virat feels grateful and holds Sai’s hand in gratitude telling her that this is the second time she has saved Patralekha today.

© Copyright tellybest.com, 2022, 2023. All Rights Reserved. Unauthorized use and/or duplication of any material from tellybest.com without written permission is strictly prohibited.
Cached Saved on: Wednesday 25th of January 2023 10:59:40 AMCached Disp on: Wednesday 1st of February 2023 07:08:37 PM