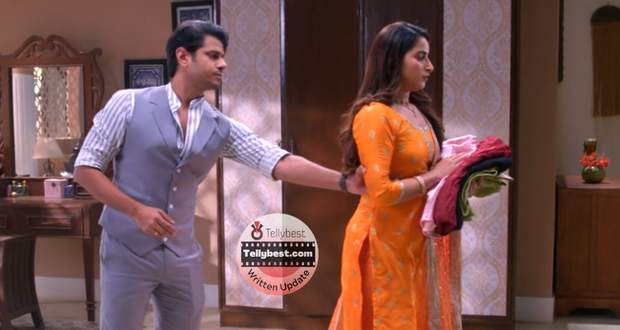 Today's Ghum Hai Kisi Ke Pyar Mein 18th January 2023 episode starts with Vinayak showing the clay model to the family while Patralekha reminds him to keep the form with him.

Meanwhile, Vinayak asks Ashwini to pack an extra tiffin as Sai has organized a Pooja for something and Savi might not get the tiffin.

Ashwini wonders what could be Sai performing the Pooja for.

In the meantime, Virat angrily thinks that Sai did not listen to him.

Bhavani tells them that it is the same day when Sai took away Vinayak from them and they should have done the pooja as well.

Patralekha and Ashwini tell her that it was decided that they will not do any such Pooja after adopting Vinayak as he is the heir to the family.

Bhavani tells Patralekha that adopting will not change the fact that the heir to the family is no more.

Bhavani tells them that if they had done the Punnye Tithi Pooja then the problems happening in the family might not have arisen.

Virat gets angry and tells Bhavani how many times he will have to tell her that he does not want the Pooja conducted and remember this day.

Bhavani gets surprised saying she had never broached this subject before then why is he saying that he has objected to having a Pooja.

In the meantime, Virat is worried about some inauspicious effect on Vinayak that Sai Pooja can have.

As Sai is fulfilling the rituals of the Pooja, Virat comes there and obstructs the Pooja saying does she know the effect of conducting a Punnye Tithi Pooja for a living.

Sai tells her that she is well aware of the side effect that Punnye tithi has on the living and that is why this Pooja is for Deergh Aayu (long life) of their son.

Virat looks surprised to hear Sai knowing the truth about Vinayak being alive.

Sai asks him to not hide the truth from her and tell her where her son is as she knows he is aware of it.

Virat is conflicted to hear Sai and thinks of Patralekha who is moving towards depression.

Just then Jagthap comes there and tells her not to beg Virat for anything as he has found out everything about her son from the same source.

He chides Virat for keeping the truth from Sai and tells him to tell her the truth himself or he will regret it for the rest of his life for being the reason for keeping a child separate from her mother.

He tells him that he will count to 3 and after that, he will tell her himself.

Virat stops him as he reaches the count of three and tells Sai that their son is alive.

Sai feels elated to hear the words and begins to cry with relief and happiness.

On hearing that Vinayak is with him, Sai looks surprised,

Virat tells her that his adopted son is real Vinayak.

Sai is shocked to hear it, while Virat tells her that he is living with his own son for so long.

Sai breaks down hearing about Vinayak being her Vinayak and hugs him with happiness and pent-up grief. She smiles at finding out about Vinayak.

Virat is equally relieved to finally let the truth out but then Sai realizes why Virat has kept the truth from her and asks him the same.

Virat explains to her that he had come to her with the information immediately after finding out but fate had other plans for them and Patralekha had to go through a uterus removal operation and has no hope of ever becoming a mother.

He then decided to keep the secret to himself until things calm down.

© Copyright tellybest.com, 2022, 2023. All Rights Reserved. Unauthorized use and/or duplication of any material from tellybest.com without written permission is strictly prohibited.
Cached Saved on: Wednesday 25th of January 2023 09:06:00 AMCached Disp on: Wednesday 1st of February 2023 08:52:15 PM