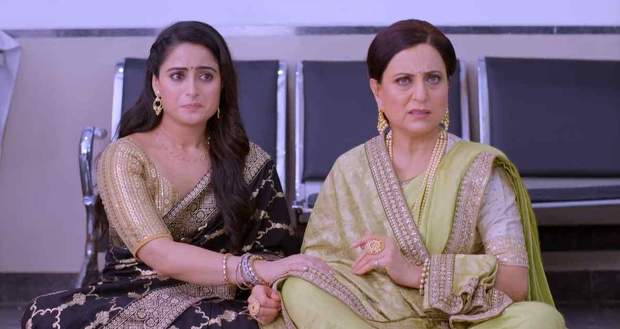 Today's Ghum Hai Kisi Ke Pyar Mein 18th July 2022 episode starts with Jagtap running away towards the scooty when a bullet hits him.

Vitthal Maane accuses Virat of shooting Jagtap but Virat tells DCP that one of the robbers has shot him.

Meanwhile, Ashwini is calling Patralekha, Sai and Bhavani but when she couldn't reach them so she calls Virat to inform him about them.

Virat tells Ashwini that all three of them are in danger and assures her that he will not let anything happen to her.

Meanwhile, Jagtap comes inside injured while Tony mocks them for trying to play tricks with him.

Just then, Tony gets the location of the helicopter.

Sai goes to Jagtap and threatens him with death.

However, Sai feels obliged to help a patient in need and help take his bullet out.

Tony is amazed to see Sai’s generosity knowing full well that Jagtap has killed her father and brother.

Tony is suspicious of Sai and warns her to not play any tricks on him or else he will kill her family.

Virat tells Vitthal that Sai must have started working on Jagtap’s wound and will save him despite what he has done to her father and Samrat.

Later, Virat asks DCP to allow him to go inside as there is only one and a half hour window in which he can save the hostages after that Tony will start killing them one by one.

Bhavani is amazed to see Sai helping her father’s killer.

Jagtap apologises to Sai and thanks her for helping him despite her history with him and gives his phone to contact Virat.

After a while, Virat and Sai begin to chat with each other to find an alternate way to get inside the hospital.

Sai tells Virat about a loose window at the pharmacy and asks Virat to come from there.

Virat tells DCP that he has found an alternate way in and will go alone to get these people out as the whole team will alert the robbers and something can go wrong.

Before Virat could leave, Ninad, Mohit, Omi and Raj come worrying about Bhavani and Patralekha while DCP explains the situation to them.

Later, Mohit informs Karishma that Patralekha, Bhavani and Sai have been under arrest by robbers which leave Ashwini worried.

Meanwhile, Virat uses the pharmacy window to enter the hospital and a cylinder falls down when he opens the door.