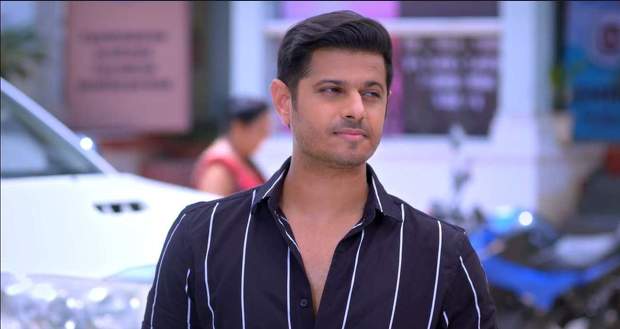 Today's Ghum Hai Kisi Ke Pyar Mein 18th May 2022 episode starts with Sai requesting Dr Thuraat to listen to her. She tells him that she will do everything from now on only if he allows her to go early.

Dr thuraat assigns Sai with delivery duty and tells her that she can go after performing the delivery.

Sai gets puzzled and tells him that delivery can take hours and it's her first day so she is not trained enough to perform the job.

Dr Thuraat mocks her highest marks and tells her that this is the only offer, take it or leave it.

He also instructs the staff to not allow Sai to get her phone to inform the family.

Sai feels distressed at not being able to inform Virat.

Meanwhile, Virat is waiting outside when he gets a call from Bhavani reminding him to come on time.

Sai is in the labour room while her eyes are on the clock.

Virat asks the guard about the time of Interns getting off duty but he has no knowledge of it and asks him to go and find out at the reception.

In the meantime, Sonali is questioning Ashwini about Sai while Bhavani tells her that she should focus on her daughter in law.

Bhavani also shows the necklace that she has specially ordered for Sai.

Sonali does not like Bhavani giving importance to Sai but Bhavani quietens her.

Just then Karishma comes back from the parlour and gets scolded for dressing so heavily while Patralekha taunts Bhavani for giving all the importance to Sai.

At the hospital, Sai is trying to calm the patient who is asking for her husband.

At home, Bhavani is getting impatient at Sai’s delay.

Ashwini calls Virat who tells her that his tyre is punctured and that's why they are late.

Meanwhile, Dr Thuraat comes to the labour room and taunts Sai which Sai does not like and answers back.

Dr Thuraat gets angry and tells Sai that she will have to bear the consequences of her behaviour.

Dr Thuraat finds out about Sai talking to Virat and vows to punish her suitably.

On the other hand, Bhavani goes to open the door expecting Sai and Virat but gets a shock.