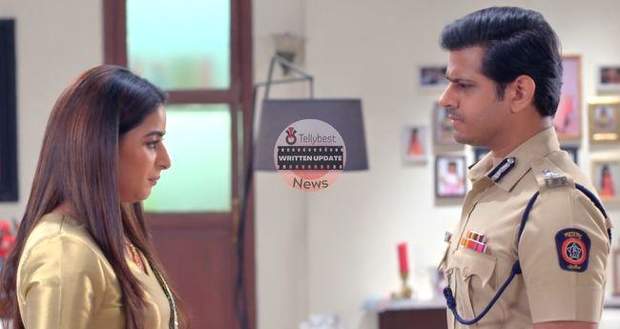 However, Ninad tells her to come as well and consider the invitation from her father.

Just then Bhavani taunts Ashwini and Ninad for not asking her about the veneration before deciding on it.

Ashwini tells her that she is well aware of Bhavani’s feelings for Savi but she wants to welcome her granddaughter to the family.

Bhavani scolds her for not taking her permission while Ashwini apologises realising her mistake.

However, Bhavani tells her that veneration will only take place as per her instructions.

Meanwhile, Sonali and Omi are shocked to see Bhavani agreeing to the Savi’s welcome.

Sonali sympathises with Patralekha who is sidelined in all this and no one asked her what she wants.

Meanwhile, Sai is looking for jobs when her homemaker brings a sewing machine to Sai on Sai’s request.

Sai requests her to allow her to not pay the deposit immediately and that she will be giving the rent from time to time.

She tells Sai to not worry as the owner is her well-wisher.

Sai looks puzzled at the comment when she turns the comment saying the owner is happy that good people are residing in the house.

After a while, Sai tells Usha that Savi will need a dress for tomorrow's function and for that she thought she will make it with one of her Sari.

The next morning, Chavan's house is being decorated like a new bride and preparation for Savi’s welcome are in full swing.

Vinayak tells Ninad that he will take care of the inside decorations.

Ninad smiles proudly at Vinayak acting all responsible and praises him for it.

Meanwhile, Sonali expresses her surprise to Bhavani at this change of heart while Bhavani tells her that she is not playing any games but is only happy for Ninad and Ashwini.

However, Sonali tells Omi that it is hard for her to believe that Bhavani has a nefarious motive behind her cool and calm composure.

Later, Virat brings a new dress for Savi to which Sai objects saying only she decides what Savi can and cannot wear.

However, Virat tells her that now he is also part of Savi’s life and there are a few decisions that he will also take for Savi.

Later, Savi comes to Virat and selects the dress he brought for her.

Sai feels insecure about not being able to afford an expensive dress and tells Virat to let Savi lead a simple life and not think that she cannot buy dresses for Savi.

Virat tells her to be not so touchy and use her dress on any other occasion.

Later, Ashwini is preparing Rangoli and asks Patralekha if she has prepared a gift Plate.

Patralekha looks lost and tells her that she will prepare it right away but Karishma has already done it.

Ashwini recalls her past behaviour with Sai and feels guilty for being rude to her.

Just then, jeweller comes with a chain for Savi and Ashwini asks him to show some pendants too.

Sonali looks confused and asks Ashwini who is the pendent for when she has a chain for Savi.

© Copyright tellybest.com, 2022, 2023. All Rights Reserved. Unauthorized use and/or duplication of any material from tellybest.com without written permission is strictly prohibited.
Cached Saved on: Monday 21st of November 2022 01:14:14 AMCached Disp on: Saturday 10th of December 2022 02:51:33 PM