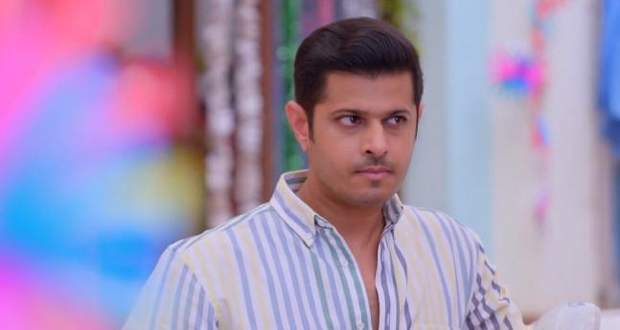 Today's Ghum Hai Kisi Ke Pyar Mein 19th April 2022 episode starts with Virat telling Rajeev that AC is still not working properly while Bhavani stops him asking him where she had seen him to which Rajeev replies very creatively and leaves.

In his room, Virat tells Rajeev not to get his hopes high and that he will only help Shivani.

All three of them get happy at Virat agreeing to help them.

Later, Sai hugs Virat to thank him while Virat feels shocked at being so close to her.

Afterwards, Sai asks Virat about his plan to convince the family members while Virat chucks her saying 'Jai Shree Ram'.

The next morning, Patralekha reminds Bhavani about asking Sai about Rajeev.

Bhavani asks Patralekha to go get her from her room so that she can interrogate her.

Meanwhile, Sai comes and asks them about Virat who is not in his room.

Ashwini gets worried about Virat and assumes that Virat has left them.

Samrat tries to call Virat but his phone is off.

Bhavani scolds Sai for making Virat so angry and also asks her about Rajeev.

Just then doorbell rings and a parcel with a card for Bhavani comes in.

In the card, all the members are invited to attend the ‘Bhandara’ organised in the name of Bhavani’s late husband.

Everyone is trying to guess the identity of the sender and assumes it to be Virat.

Later, they decide to go to the venue to find out who has organised the ‘Bhandara’.

At the Bhandara, Sai is looking at Virat lovingly while Rajeev asks Sai to confess her love for Virat.

Sai tells him that she has to wait for another day as today is for him and Shivani.

Later, Sai comes to Virat to tie the headband (Pheta) on his head.

Meanwhile, Rajeev comes and compliments Virat while Virat accuses him of being cool despite the tension.

After a while, Sai tells them that everyone thinks it is Virat who has arranged for the ‘Bhandara’ which surprises Rajeev.