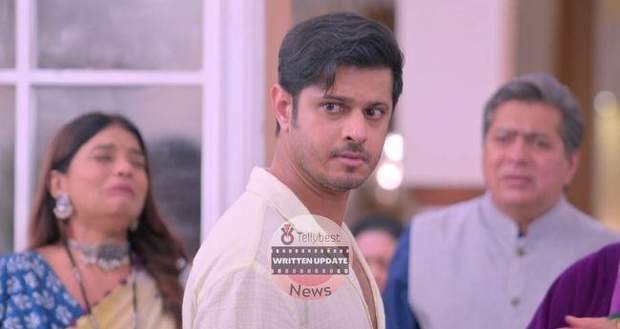 After a while, Virat finds Vinayak's carrier and Sai’s luggage and thinks the worst.

On the other hand, Sai wakes up beside a river and rushes to search for Vinayak.

In the meantime, Chavan's are trying to get in touch with Virat but they couldn’t connect.

Meanwhile, the doctor takes Sai to the camp to give first aid but Sai leaves to search for him.

Someone tells Sai that a small child is found and asks her to go check on him.

Seeing the burning pyres and body of dead baby Sai is aghast.

After a while, Sai is moving away from the ground when her Saari is torn by the wood and a part of it is left there.

Virat finds Sai’s torn Sari piece and assumes her dead when he could not find her name in the list of alive people.

Regretting letting Sai leave on that dreadful day Virat loses all hope and cries with pain as Sai’s memories bombard him while Sai loses consciousness away from the accident site.

On the other hand, Sai wakes up in a hospital and searches for Vinayak.

However, Vinayak is nowhere to be found but the doctor on duty tells her that she is expecting a child and should take care of it.

Sai is torn between mourning the loss of Vinayak and feeling happy about a child in her womb.

After a few years, in a city away from Nagpur, a little girl is writing “papa Kab Aaoge” on trees when Sai comes looking for her and asks her to not go into the jungle.

Seeing the message on the tree Sai feels sad for Savi as she cannot tell her about her father.

Savi, on the other hand, tells Sai that she is asking mother earth to tell her when his father will come back.

Sai tells Savi that her father and mother are both her and tells her to go home.

However, Savi stubbornly asks Sai to tell her when her father will come to her.

© Copyright tellybest.com, 2020, 2021. All Rights Reserved. Unauthorized use and/or duplication of any material from tellybest.com without written permission is strictly prohibited.
Cached Saved on: Saturday 1st of October 2022 11:39:04 PM