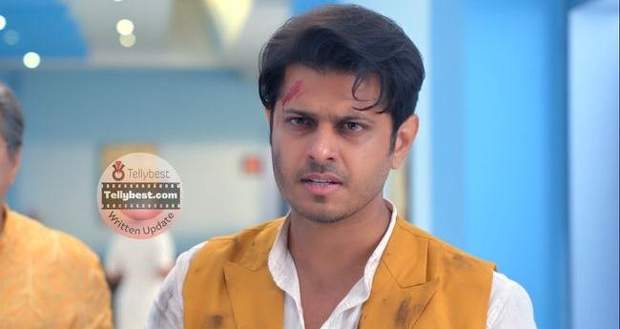 Today's Ghum Hai Kisi Ke Pyar Mein 19th December 2022 episode starts with Virat telling Sai that he cannot ever repay back for what she did for Pakhi today.

With slim tears lining his eyes, Virat thanks Sai for saving Patralekha while Patralekha's eyes slowly open up, as she lies still on the hospital bed.

She gets flashbacks of those moments during the bus ride when Virat told her that he is going to show what she means to him when the time arrives.

Pakhi grimaces as she also remembers how Virat saved Sai so speedily without thinking anything else.

Sai notices that Patralekha's eyes have opened and she happily says that everyone is waiting for her outside.

Pakhi watches Sai silently who says she will call Virat inside but Pakhi holds her hand.

Sai sees that Pakhi wants to speak and removes the oxygen mask.

Patralekha asks Sai why she saved her since the biggest block in her life was about to die.

Sai's smile vanishes as she quickly reminds Patralekha that the block she is talking about is not in her life anymore, she has moved on.

Further, Sai says that Patralekha was her patient at the moment and as a doctor, Sai would do anything to save her.

Out of the blue, Pakhi asks Sai what if they both were stuck in the same bus, who would have Virat saved?

Sai's expression hardens and she tells Patralekha that this question is meant for Virat to answer.

Soon, Vinayak walks in and kisses Pakhi's hands, saying he missed her so much, and cries by her side.

The whole Chavan family comes to see Patralekha and cries happy tears, especially Ashwini who says that Pakhi has a lot of people who love her, including Sai and Virat who left their safety net to save Pakhi.

However, Bhavani says if Virat would have noticed Pakhi, instead of Sai, all this wouldn't have happened.

Sonali mindlessly mumbles and states that a sautan (co-wife) saved her sautan's life.

Virat scolds everyone and says if they don't have anything good to say, they should keep quiet and let Pakhi rest.

Meanwhile, Usha worriedly hugs Sai when she comes back home and Savi makes Usha laugh with her cuteness.

After Savi goes inside the house, Usha apologizes to Sai, saying she will never cajole her to go and spend time with Virat because a tornado of disasters has already started in her and Savi's life.

At the hospital, Vinayak and Virat sit by Patralekha's side as Virat swears that he didn't know about Pakhi being stuck in the bus.

However, Virat's apology makes Pakhi hold her heart as if it is paining and she turns her gaze away.

Later, Ashwini welcomes Pakhi and Virat at the entrance and states that Vinayak hasn't eaten food yet.

Pakhi gets worried and strokes Vinayak's face who says like she used to keep fast for his wellbeing, he did the same thing.

Bhavani smiles with tears in her eyes as Virat slightly touches Patralekha's arm to help her walk.

However, she grimaces at his touch and shuns away, making Virat feel guilty.