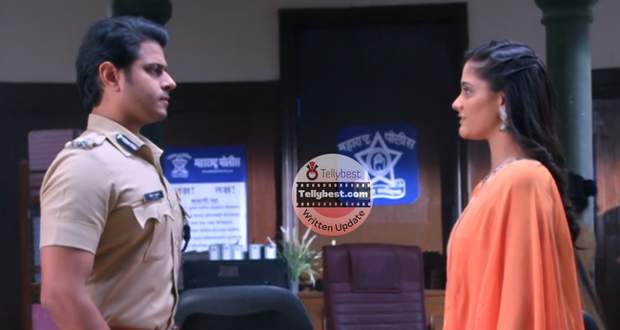 Today's Ghum Hai Kisi Ke Pyar Mein 19th January 2023 episode starts with Virat telling Sai that he did not tell her about Vinayak because of Patralekha whose only hope of happiness died with her uterus operation.

Sai is shocked to hear this because due to Patralekha, he denied her the chance to know about Veenu.

Virat tells her that he was afraid that she might repeat history and take Vinayak with her.

He talks about Patralekha’s suffering, telling Sai that if this last hope is taken away from him then, she will die.

Sai gets furious at Virat’s reasoning and pushes him away and shouts at him for not telling her about her son for Patralekha’s sake.

She asks him emotively if he has no heart or has his heart become stone.

Sai also questions him about how he could not see the grief and guilt she has been burning in for so many years.

Sai walks away in anger, telling him that she does not want to see his face.

Virat tells Sai in anguish and agony not to tell anyone about this truth.

However, Sai angrily looks at Virat and leaves in an auto, warning Virat to stay away from her.

Meanwhile, Patralekha is waiting for Vinayak outside his school and is shocked to discover that Vinayak left long ago.

Patralekha gets worried and calls Sai to ask if she has picked Vinayak along with Savi.

However, her phone is not reachable which further worries Patralekha.

Meanwhile, Virat is thinking about Sai and her next step after knowing about Vinayak.

Just then, Virat gets a call from Patralekha who is worrying about Vinayak not being at school and tells him that she is going to check the CCTV footage.

Virat worries about Sai's impulsiveness and calls Karishma to check whether Sai has returned home.

He fears that Sai has taken Vinayak to Kankauli with her and calls Sai’s hospital to check if she is there.

Virat's heart is beating at double speed thinking about Sai taking some extreme decision like she has done it before.

She tells Virat angrily that Sai has dared to take Vinayak with her and that too without her permission.

Virat tries to calm down Patralekha, telling her that he will bring Vinayak back home.

Later, Virat traces Sai’s phone and is shocked to find out that her last location is a bus stand.

Virat fears the worst, recalling her past actions, and hurries to the bus station to stop Sai from leaving.

At the bus stand, Virat finds Sai sitting at a cafe with luggage sitting beside her table.

Meanwhile, Sai asks Vinayak to cut the cake while Savi asks Sai why are they cutting the cake.

Sai tells them that today is a very special day and they will celebrate Vinayak’s birthday as they never get to celebrate even one.

Later, Sai hugs and kisses Vinayak and tells him that she has prayed to God for a wish, and that wish is granted today and that is why she brought them here to celebrate.

Just then Virat comes there telling Sai that she cannot leave with the children.

Sai looks stunned to see and hear Virat while someone else comes to him and tells him that the luggage belongs to him.

Virat feels awkward at the misunderstanding and asks Vinayak why did he come with Sai without telling him.

Sai asks Virat to talk to her and not the children.

Virat asks her why did she not tell him that she is taking the children while Sai tells him not to talk about telling things to each other in an ironic way.