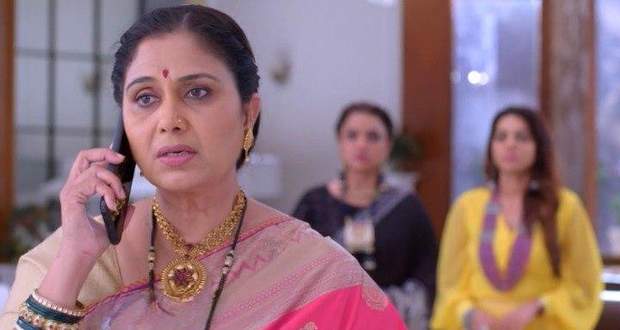 Meanwhile, Tony is waiting for the helicopter when a fire extinguisher falls and Tony sends his man to check the noise.

Virat hides in the morgue to escape being caught.

After a while, Tony's men come telling him that everything is clear now.

Tony is feeling confident that they will leave in one hour and contact the police to seek assurance.

DIG tells him that Virat has gone to make sure that everything stays in order.

Just then, Virat comes and sits beside Sai who feels relieved to see him and asks the rest of the people to be quiet about it.

Afterwards, one of Tony’s men goes to the restroom and Virat follows him there and kills him.

Meanwhile, Tony is annoyed at the delay and suspects something fishy but his men boast to him about the police being too afraid to trick him.

In the meantime, Sai tells Akshara, the hostage, to think hard before taking a divorce as a loving partner is a gift that not everyone is blessed with.

Sai tries to stop Tony when Patralekha takes Virat’s name and Tony gets alert and calls Virat out and threatens to kill his family.

Virat comes out and asks Tony to put the gun down but the robbers continue to hold the gun on Patralekha and Sai’s heads.

As Tony asks his goon to kill Patralekha first, Bhavani gets wild and using a drip stand attacks the goon and shocks them.

Tony points the gun at Bhavani but Sai pushes Tony at the last minute and his gun hits Virat instead of Bhavani.

Just then, Jagthap slides the gun towards Sai who slides it towards Virat.

Virat shoots Tony and overtakes him and calls the emergency team inside.

Afterwards, he tells all the hostages that they are free to go who in turn thank Virat.

Later, Jagtap surrenders himself to the police and tells Sai that he is indebted to her.

Afterwards, Sai cheers Bhavani for acting valiantly while Patralekha looks for her reports.

After a while, Sai finds Patralekha's report and is shocked at the findings.

© Copyright tellybest.com, 2022, 2023. All Rights Reserved. Unauthorized use and/or duplication of any material from tellybest.com without written permission is strictly prohibited.
Cached Saved on: Wednesday 25th of January 2023 12:31:18 PMCached Disp on: Thursday 9th of February 2023 08:02:15 AM