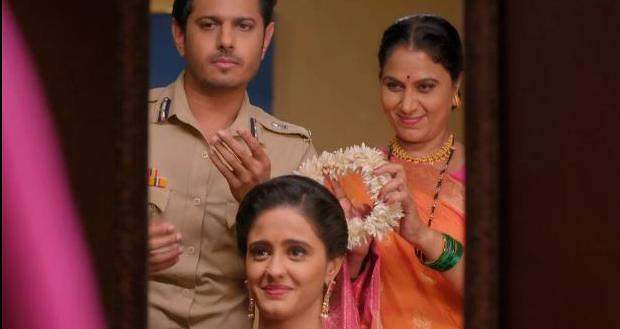 She agrees and they leave while Ashwini taunts Virat.

Later, Ashwini dresses up Sai while she resists.

She gets emotional while Sai calms her and jokes on.

Ashwini says that she is Sai's mother which makes her emotional as she remembers other family member's behavior.

Virat comes there and teases her saying that it looks like she's going into a drama.

Sai gets upset and says that she isn't going anymore while he tries to convince her.

Further, she shows a Saree to Virat and asks him if they can gift it to Pakhi's mother.

© Copyright tellybest.com, 2020, 2021. All Rights Reserved. Unauthorized use and/or duplication of any material from tellybest.com without written permission is strictly prohibited.
Cached Saved on: Thursday 29th of July 2021 08:14:55 PMCached Disp on: Sunday 1st of August 2021 06:21:09 AM