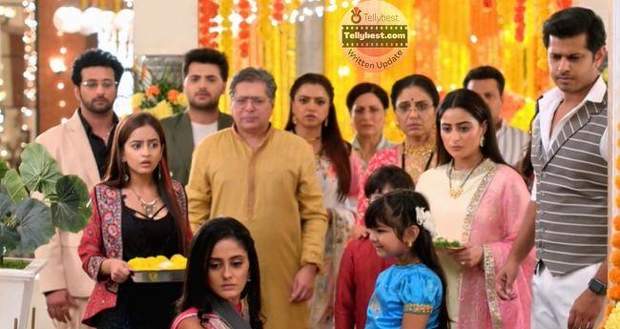 Later, Sonali asks Karishma about her previous night's comments about having no relationship with Mohit.

However, Karishma looks frustrated and tells Sonali to ask Mohit about it.

Just then Savi comes with Sai and Virat and Ashwini calls everyone.

On being called Ma’am by Savi, Ashwini tells her that now she is her Aaji.

Later, Virat introduces her to everyone and gets stuck while introducing Patralekha.

Ashwini asked Mohit to get the sindoor plate and ask Savi to walk on the cloth after putting her feet in the plate.

Savi asks them the meaning of this ritual while Ashwini tells her that she is the Lakshmi of the house and part of this family therefore she will have to come this way.

As Savi reaches the end of the cloth her feet slip and she falls.

Sai runs towards her and unconsciously puts her feet on Sindoor's plate making her footprints on the cloth as well.

Sonali expresses concern at Sai’s footprints while Savi asks Sai if she has also become the Lakshmi of the house.

Sai denies being one while Patralekha anxiously tells Savi that Savi has made her footprints by mistake but in reality only she is the Lakshmi of the house as the Veneration is for her.

Later, Patralekha sits down to wipe Sai’s footprints from the floor while everyone looks at her sympathetically.

Patralekha tells them to carry one while she rubs the footprints like mad.

In the meantime, Ashwini asks everyone to get inside and get on with the rituals.

Inside the house, Ashwini asks Savi to sit on the weighing machine and they will weigh her weight equivalent of sweets that will be distributed to the charity.

Savi gets impressed and climbs on the scale while Mohit and Pulkit start filling the scale with sweets.

Seeing this, Vinayak asks Patralekha whether all these rituals happened for him as well.

Patralekha feels sad for Vinayak and tells him to ask his father about this.

Vinayak feels guilty for not doing this and tells Vinayak that when he came into his life they were so happy that they forgot about the ritual altogether but promise to do the same soon for him too.

Afterwards, Bhavani reminds Ashwini that there is one ritual left and goes to get the scissor.

Everyone looks curiously at Bhavani while she tells them that this ritual is called Zawal where the hair of the child is entirely cut so new hair can grow after it.

However, they were not there at the time of her birth so they will only cut a little of it.

Savi does not want to get her hair cut but Sai convinces her otherwise.

Later, Ashwini offers to throw the hair in the pond but Bhavani tells her that she will do it herself.

Meanwhile, Harini questions Bhavani’s humbleness who does not like Savi one bit till yesterday and all of a sudden she is offering to throw Savi’s hair in the pond.

© Copyright tellybest.com, 2022, 2023. All Rights Reserved. Unauthorized use and/or duplication of any material from tellybest.com without written permission is strictly prohibited.
Cached Saved on: Monday 21st of November 2022 01:23:53 AMCached Disp on: Friday 9th of December 2022 05:09:52 AM