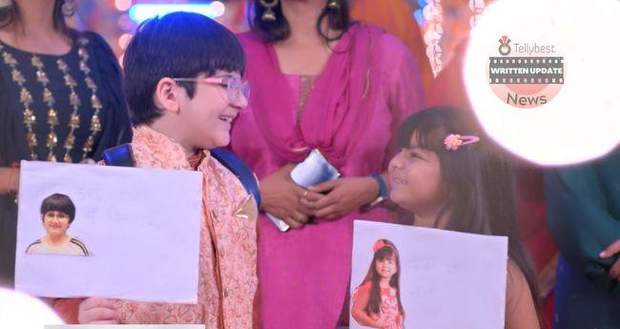 Today's Ghum Hai Kisi Ke Pyar Mein 19th October 2022 episode starts with Patralekha stopping Sai and hugging her in gratitude for returning her son back to them.

Sonali tells everyone that Sai is smart enough to create a problem and then solve it to bag the praise all by herself.

Bhavani looks thoughtful and tells Ninad that she can sense a storm brewing and that is making her nervous.

Afterwards, Savi is talking to Vinayak on the phone and convinces him to eat and be happy.

Later, Patralekha and Virat plan a surprise party for Vinayak to cheer him up.

Meanwhile, Savi tells Sai that she has convinced Vinayak to eat and be happy.

Later, Savi asks about the meaning of adoption and asks Sai if she is adopted too.

Sai looks surprised at the question while Savi tells her that it is the reason why she has no father.

Sai tells her that she has given birth to her and she is her mother.

Afterwards, Usha tells Sai to tell Savi about her father before she finds out about it from someone else.

Meanwhile, Virat and Patralekha settle on Vinayak's bed. Between the love and laughter, Virat assures Vinayak that they are one family and cannot be separated from each other.

Later, Vinayak dreams about Virat and Patralekha leaving him and his schoolmates making fun of him.

Patralekha wakes up and assures him that they will never leave him.

The following day, Savi explains to Sai and Usha the importance of Dusshera.

Sai also tells Savi about the pompous way they celebrate Dusshera in Nagpur and promises to take Savi there.

Meanwhile, Virat and Patralekha also explain to Vinayak the importance of Dusshera.

Ashwini agitatedly tells Patralekha not to include Sai in their personal family matter because Sai will take away her son and her husband too.

Patralekha tells her that she has confidence in Virat and at the moment her only priority is her son who is getting better with Sai’s treatment.

Patralekha also suggests to them to make a fresh start on the Dusshera while Bhavani tells her that her approach to a new beginning will cost her heavily.

After a while, Patralekha apologises to Sai for her rude behaviour. Still, Sai tells her that she understands how she must be feeling in the situation and there is nothing to apologise for.

Patralekha tells Sai that she has never imagined that she will seek her help to cure her son and that her son will receive so much love from Sai.

Later, Patralekha and Sai come to an understanding that they should make a fresh beginning and Pakhi passes the leaf to Sai with good wishes.

© Copyright tellybest.com, 2022, 2023. All Rights Reserved. Unauthorized use and/or duplication of any material from tellybest.com without written permission is strictly prohibited.
Cached Saved on: Monday 21st of November 2022 02:22:15 AMCached Disp on: Monday 5th of December 2022 01:19:16 AM