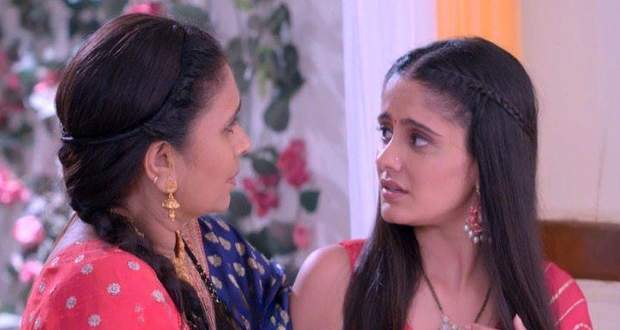 Today's Ghum Hai Kisi Ke Pyar Mein 1st August 2022 episode starts with Sai bringing milk for Virat while Virat tells her that he is not angry with her anymore for bringing Patralekha back with all her conditions.

Meanwhile, Sai tells him that Patralekha blackmails her into doing everything she wants.

Virat defends Patralekha saying that pregnancy is making Patralekha do all these things and she must be feeling lonely and that is why she went there to get peace.

Sai accuses Patralekha of playing with their emotions and that she knew exactly how they will feel seeing her standing near the cliff.

Just then Patralekha calls Virat and asks him to come without asking questions.

Later, Patralekha tells Virat to take her out to eat ice cream as she is having many mood swings.

Patralekha blackmails Virat into taking her with him while Sonali and Karishma mock Sai.

Sai tells them that Virat is taking care of Patralekha for the sake of their child which is very important for her and Virat.

Just as she is going, she feels dizzy and holds the pillar.

Meanwhile, Patralekha tells Virat to bring her regularly for ice cream while Virat tells her to treat him as her friend and share whatever she wants to share.

In the meantime, Ashwini comes to Sai to check on her knowing Patralekha has taken Virat for ice cream.

Suddenly Sai feels a headache and tells Ashwini that she is feeling tired all the time and sometimes gets dizzy.

Ashwini gets worried and offers to bring milk for her which she denies.

Afterwards, Virat brings Sai’s favourite ice cream which makes her nauseated making Virat wonder what is wrong with her.

The next morning, Patralekha is under the weather and Sai goes to get make Kadha for Patralekha saying it is not good for a would-be mother to sneeze and cough.

After a while, Sai comes into the kitchen to make Kadha but Ashwini tells her to pour tea while she prepares Kadha.

Sai feels nausea at the smell of tea and rushes out to her room.

Virat who is standing in the hall checking on Patralekha questions Ashwini about Sai’s condition.

Ashwini tells Bhavani that Sai feels nauseated with the smell of tea.

Sonali also tells her that Sai was feeling dizzy at night.

Bhavani measures the symptoms and comes to the conclusion that Sai might be pregnant which shocks everyone.

© Copyright tellybest.com, 2022, 2023. All Rights Reserved. Unauthorized use and/or duplication of any material from tellybest.com without written permission is strictly prohibited.
Cached Saved on: Monday 21st of November 2022 08:08:27 AMCached Disp on: Thursday 1st of December 2022 10:34:59 PM