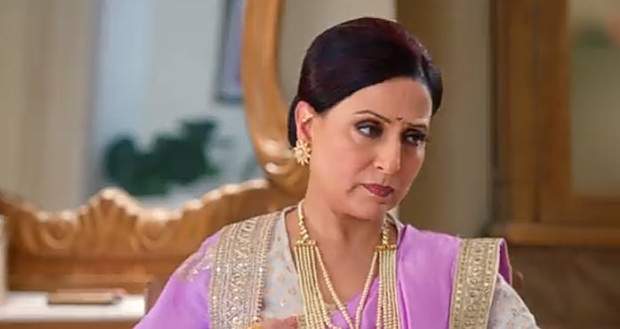 The Chavan family greet each other Happy Diwali in the hall and joke about Sai and Virat's baby.

Later, all the couples feed each other Panipuri while Sunny comes there and takes Virat and Sai aside.

He gifts both of them a frame of them in a funky photo and talks about Sai shifting to Virat's room while Pakhi eavesdrops in their conversation.

Sai goes while Sunny encourages Virat to be excited about Sai's return in his room.

Meanwhile, Sai goes to Ashwini who tells her to think about her happiness for once but Sai doesn't get the hint and instead wishes her a happy Diwali.

Further, the DIG comes to the Chavan house and sits with Sai while Virat goes to bring cold drinks.

DIG tells Sai about the time when Virat got a call of her accident and how tensed he was for her and tells her that Virat cares for her a lot.

Just then, Virat comes there with the cold drinks, and DIG tells him to drop him outside as he wants to discuss something important with him.

Meanwhile, Sai recalls her moments with Virat and realizes how much Virat cares for her and scolds herself for not realizing his feelings.

Ashwini sees her crying and goes to her after which she tells Sai she will find the answer within herself.