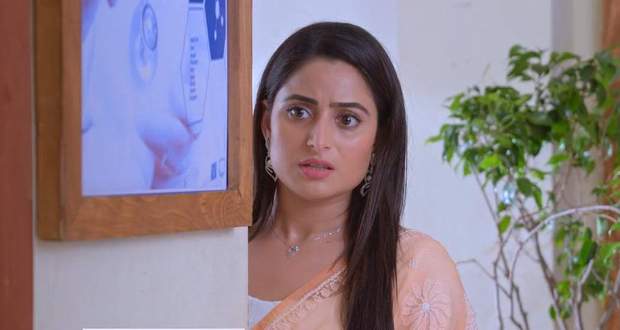 Ashwini tries to pacify Bhavani’s anger by expressing tales of the past and how they raised Virat together and asks her why is she angry with Virat now.

Bhavani tells Ashwini that she was able to do all that and care for Ashwini because she was here in this house just like Patralekha would have been if Sai had chosen her instead of some outsider.

Meanwhile, Sai feels her father’s presence while Virat assures her that no one can come between them and their child now.

On the other hand, Patralekha tells Vaishali to let Sai and Virat make plans but she will not let it happen.

Vaishali tries to keep her from her stubbornness but Patralekha tells her that only she will be the surrogate mother to SaiRat’s Child.

Just then Bhavani comes to apologize to Patralekha for not being able to convince Sai and Virat to choose her.

Patralekha fakes her concern for Bhavani which works like a charm and Bhavani gets emotional and praises Patralekha for being so selfless.

Bhavani offers Patralekha to ask anything of her as a gratitude for her selfless act.

Patralekha tells her that she needs nothing now but if ever she needs her help then she will come to her.

The next day, Sai tries to relax Virat and tells him to have faith in God who will do everything as it should be whereas Virat praises her optimism.

Later, everyone wishes them good luck and expresses their happiness for soon being promoted into new relations.

At the same time, Patralekha leaves the house with the pretext to go to the temple.

Meanwhile, Bhavani tells Sai that she will accompany them for the procedure to which they agreed.

At the hospital, Doctor tells Bhavani, Sai and Virat that everything should run smoothly as both the surrogate mother and eggs are healthy.

However, this procedure needs to be performed within 3 hours else the eggs will go to waste and Sai will have to wait years to get pregnant.

Before Geeta could leave, Patralekha arrives at Geeta’s house disguised as a doctor's assistant.