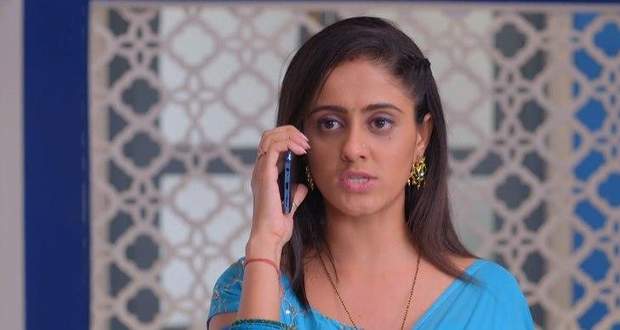 Today's Ghum Hai Kisi Ke Pyar Mein 1st June 2022 episode starts with Jagthap telling the Chavans to let Sai marry him or else they will have to bear the consequences.

Hearing the obscene message, Samrat takes Sai to Virat who gets angry at Jagthap’s daring and goes to teach him a lesson.

Meanwhile, Jagthap tells his goon that he is preparing himself to battle Virat so that he can defeat him and make Sai their sister-in-law.

Just then Virat arrives at Jagthap’s place where his goons attack him.

Jagthap mocks Virat for coming there while Virat tells him that he is here to teach him a lesson and takes off his uniform.

Jagthap tells his goon to attack him but they gets beaten one after another and finally it's Jagthap’s turn to fight him. Virat gives him a sound thrashing and warns him for misbehaving his wife.

Afterwards, Virat ties Jagthap to his Jeep and humiliates him and brings him to Chavan’s house.

Sai is afraid to see Jagthap and Virat and recalls Kamal’s death.

Jagthap asks Virat to release him while Virat tells him to apologise to Sai.

Unafraid, Jaghthap threatens Sai with consequences while Virat once again beats him badly.

Just then, DCP arrives at the Chavan house and stops Virat. Jagthap's father complains to DCP about Virat mistreating Jagthap and asks him to punish him whereas DCP asks Virat to apologise to Jagthap.

Afterwards, DCP asks the Jagthap father to leave with his son.

Later, DCP brings Virat to the police station and tells him to be cautious.

At the Chavan house, Samrat and Patralekha are taking Mansi to the hospital when Jagtap comes in dressed as a groom on a horseback.

Jagthap stops Mansi from leaving while Bhavani scolds him and tells him to get lost.

Sai confronts Jagthap and threatens him with another beating if he does not leave immediately.