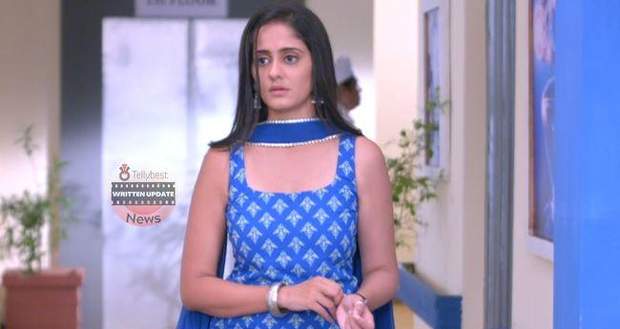 Just then, Savi comes to Sai asking about Vinayak.

Sai feels helpless and tells Usha to take Savi and sit on the bus.

Meanwhile, Patralekha asks Virat about their leaving arrangement to London when Virat asks her about Sai’s location and goes to find her.

Savi tells Sai that she will have to climb the bus as they are going back.

Savi insists on waiting for Vinayak but Sai scolds her and tells her to sit.

In the meantime, Virat finds out about Sai’s location and drives to the bus stand and later stops the bus to bring Sai down.

Meanwhile, Ashwini berates Patralekha for allowing Virat to get Sai back.

However, Patralekha tells her that she understands her fear and concerns but is not afraid of anything. She tells him that the only thing that matters to her is Vinayak and his health.

In the meantime, Sai is shocked to see Virat who takes away her luggage and signals them to get down.

Later, Mohit favours Ashwini saying that Patralekha’s decision to bring Sai back is wrong after what she has done.

Ashwini tells her that she will soon regret her decision but then it will be too late.

Elsewhere, Sai asks Virat to not create a scene after sending her back.

However, Virat tells him that a helpless father is here to request her to cure his son.

Virat offers to pay for everything she needs just to get Vinayak better.

Sai feels insulted and tells him to stop intimidating her with his money.

She also tells him that during Vinayak’s treatment, he will never offer her money or anything else and will not speak of the past.

Virat agrees to Sai’s terms and takes her to the hospital.

After a while, Vinayak wakes up and sees Savi everywhere and shuts his eyes in disappointment.

Later, Patralekha tells Vinayak that Savi and Sai are here to meet him.

After a while, Savi comes to Vinayak and offers him cotton candy.

Afterwards, Sai also comes in and assures Vinayak that he will soon be up and running and can participate in the school race.

Virat feels sad and frustrated at being proven wrong and asks Patralekha to gloat about being right.

However, Patralekha tells him that she has come to thank him and praise him that he is a wonderful father.

Being overwhelmed, Virat hugs Patralekha and apologises to her while Sai watches them hug and stands in silence.

© Copyright tellybest.com, 2022, 2023. All Rights Reserved. Unauthorized use and/or duplication of any material from tellybest.com without written permission is strictly prohibited.
Cached Saved on: Monday 21st of November 2022 07:11:55 AMCached Disp on: Friday 9th of December 2022 05:01:24 AM