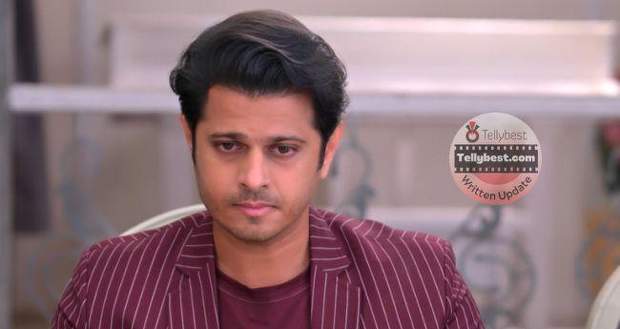 Vinayak asks Sai to come inside and see the sculpting that he is learning for a competition.

Sai tells them to go as she has something to discuss with his father.

Later, Virat tells Sai that she has scared him as he thought she is once again running away with her son and leaving him empty.

Sai tells Virat that she did not run away the previous time because running away is what cowards do, and she went in broad daylight because of the choice he made to support his girlfriend instead of his wife.

She tells him that she did not run then nor will she run now. All she wanted to do is spent time with her son who was taken away from her because of him and his family who she was searching for high and low.

Virat asks Sai what she would have done in her place which makes Sai look at him in surprise and disgust.

Sai asks him what kind of a man he is who could not see her pain and the extent she was going just to find out about her son, and all he can think of is the mental stability of his wife.

She asks him if he could not see her grief and pain, all he can think of is others and playing God with her life but she does not care about it anymore.

Sai tells him that he will have to tell his family and most importantly his wife that Vinayak is her son.

Virat tells her that he cannot let her go inside and play havoc with Patralekha’s life.

However, Sai tells him that the only way he can stop her is either by calling his police force or by killing her.

Sai jerks Virat's hands away and moves inside the house at speed.

In the meantime, Vinayak who is bringing his clay model of the house he had sculpted collides with Sai and it falls on the ground breaking into pieces.

Sai is shocked at the collision while Savi chides her for breaking Vinayak’s house.

Sai apologises to Vinayak saying she did not see him there.

Meanwhile, Vinayak becomes teary-eyed and complains to Sai that she has broken the house that he has created with hard work.

Vinayak’s words sound ominous to Sai and she tells him that she will help him rebuild it and will not let any cracks come on it.

Seeing Vinayak’s distress, she asks him if he does not trust his mother.

Virat looks shocked at Sai’s slip of the tongue while Savi reminds her that she is her mother.

Later, Virat tells Sai that can she see now what she will do with her truth.

He reminds her of the time when he wanted to tell Savi about being his father and how it will adversely affect Savi’s mental health.

Virat asks her whether she really wants to do the same thing to Vinayak which she had stopped him a few months ago.

He tells Sai to think about Patralekha who has no hope of ever becoming a mother and tells her that Patralekha was there for him when she left him and raised Vinayak with love.

On being asked about how she will live without her son while Virat tells her that she can live with Savi.

Sai is not ready to give up Vinayak

Sai applauds Virat for expecting her to sacrifice her son for his wife who was responsible for all the pain and guilt she has been living in for years.

She tells Virat to find another way to help his wife as her son is not a thing that he is asking to donate.

Sai tells him that she also deserves to live with her son after pining for years for him.

She tells him that he expects her to forget her son while he was not ready to let his son call her Choti Mumma.

Seeing Sai’s determination, Virat requests her to give him some time so that he gets time to prepare Patralekha.

Sai gives him seventy-two hours and tells him that after that she will tell the world that her son Vinayak is alive.

Just then Patralekha comes there and questions Sai for being so irresponsible in taking away her son without informing her.

Bhavani also comes there and taunts Sai for being the worst mother who has taken away the heir of this family.

Sai is about to tell her the truth when Virat tells Patralekha to calm down and let the bygone be bygone.

Patralekha accuses Virat of calling it trivia that her son was lost and she has taken it from her without her knowledge.

Sai has had enough and shouts at Patralekha that Vinayak is not her son.

Virat looks at her in fear while Patalekha looks at Sai with fuming anger.

© Copyright tellybest.com, 2022, 2023. All Rights Reserved. Unauthorized use and/or duplication of any material from tellybest.com without written permission is strictly prohibited.
Cached Saved on: Wednesday 25th of January 2023 09:10:17 AMCached Disp on: Tuesday 31st of January 2023 07:10:00 PM