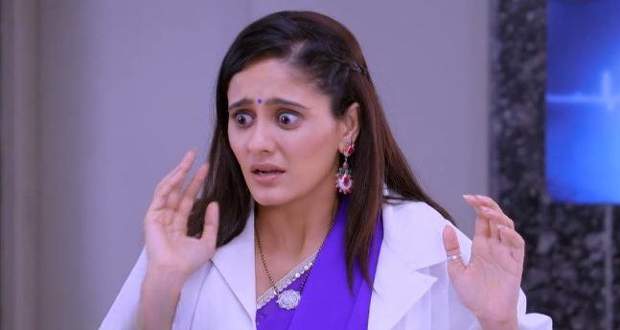 At home, Ashwini expresses her happiness at seeing them all safe.

Ninad tells everyone about Virat’s heroism while Virat boasts about Sai’s bravery and help.

Sonali praises Bhavani who has gone on a holy journey after escaping the near-death experience.

Meanwhile, Patralekha is afraid to share her news of complications thinking of how aggressive Sai will be to hear it.

Sai is worried about her child and asks to have a word with Virat alone.

In her room, Sai tells Virat about the complications of Patralekha’s pregnancy.

He is shocked to read the report while Sai blames Patralekha for these complications and once again tells Virat that Patralekha has planned to keep Geetha away and sent goons to keep Sai from reaching the hospital in time.

Virat questions Sai about all this concerning Patralekha.

Sai gets furious at Virat’s reply and tells him why can he not see how Patralekha has been manipulating the situation and due to that their child is in grave danger at the moment.

Virat is tired of Sai’s accusations and tells her that he had no choice at the time but to choose Patralekha.

He also tells her that he is investigating the case of the goons and will soon get to the bottom of it but she also needs to let go of her obsession that he had a past with Patralekha.

Sai is stunned to hear Virat’s opinions for her while Virat tries to comfort her saying he is equally concerned for the child and his safety.

Meanwhile, Patralekha is on phone with Vaishali telling her about the complications of her pregnancy.

Vaishali gets worried and tells Patralekha that if anything happens to the child then controlling Sai will be impossible.

Just then Sai comes to Patralekha and tells her that she knows about the complications in Patralekha’s pregnancy.

Sai also accuses Patralekha of keeping this information to herself and that her risks of complications are greater because she has never been a mother before.

Patralekha tries to defend herself but Sai pays no heed to her.

She tells Patralekha that from now on she will keep strict vigilance on her so that she does everything that delivers her child safely.

Sai warns Patralekha to not do anything that might harm her child and asks her to focus on her pregnancy for the next nine months.

© Copyright tellybest.com, 2020, 2021. All Rights Reserved. Unauthorized use and/or duplication of any material from tellybest.com without written permission is strictly prohibited.
Cached Saved on: Wednesday 20th of July 2022 11:03:46 PMCached Disp on: Saturday 13th of August 2022 11:57:14 PM