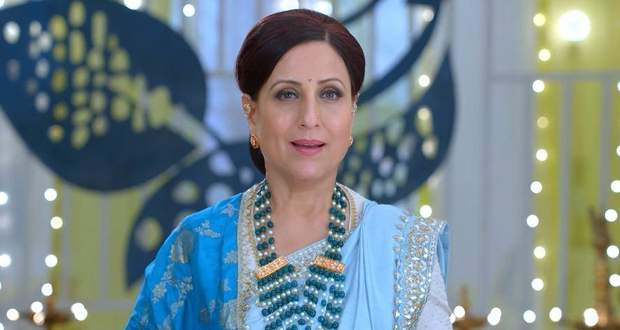 Today's Ghum Hai Kisi Ke Pyar Mein 20th May 2022 episode starts with Bhavani asking Virat where this talk of the internship is coming from.

Virat tells Bhavani that Sai is telling the truth and tells her that Sai has gone to the hospital to attend the first day of the internship.

Bhavani is sad to hear that Virat has been lying to her and tells her that she cannot believe his lies.

Bhavani shames Virat for lying to her but Virat tells her that Sai and his relationship have struggled a lot and should not question its piousness.

Bhavani tells him that she has given two choices to Sai and she had to choose one without any force.

Sai tells her that at the time, she would have chosen her career and would have left them.

Virat shares his fear of losing Sai that day and that compels him to lie.

Bhavani tells him that she feels like a fool for believing in him blindly which ends today.

Virat tells her that he wants to answer her question today that Sai will become both a doctor and a wife to this family.

Sai comes to Virat’s defence and tells her that what Virat does is only for his wife.

Bhavani scolds Sai for betraying her despite the love and affections that she has bestowed upon her.

Ashwini also disapproves of Virat lying to Bhavani and tells him that he has hurt them all.

Virat once again tries to convince Bhavani and tells her that if he had any other option then he never would have lied.

Bhavani tells him that relations based on lies never succeed.

Virat once again emphasises that his lie is only for the greater good and nothing.

Virat also tells her that her question at that time has hurt both of them, and was like blackmail for them.

Sai tells Bhavani that she cannot separate being Virat's wife and being a doctor or she will die.

Seeing Bhavani's stubbornness Virat questions Bhavani for not asking the same question to the sons of the family.